Srilakshmi, who was principal secretary, mining and geology during the YS Rajashekhar Reddy's regime, was arrested by the CID on Monday evening and produced in the special CBI court, which remanded her to judicial custody.

Srilakshmi, presently holding the post of commissioner, family welfare is the second senior state government officer to be arrested by the CBI in the case. Rajagopal, then director, mining and geology, is already in Chanchalguda jail of Hyderabad along with Gali Janardhan Reddy and his company's managing director Srinvasulu Reddy.

Srilakshmi was grilled by the CBI many times in the past and investigations revealed that she had violated several norms in allotting 68.5 acres of land to OMC while ignoring many other companies that had applied for the same before Gali Janardhan Reddy.

According to sources, Srilakshmi told CBI officials during questioning that she had acted under political pressure from higher ups.

One of the applicants for mining license, who was ignored by the state government while allotting the land to Gali's company told the CBI sleuths that Srilakshmi and Rajagopal had demanded bribe for allotting him the land.

Meanwhile, the CBI Court in Hyderabad extended judicial custody of Gali Janardhan Reddy and Srinivasulu Reddy to December 3. The court passed the orders after the two were produced from Chanchalguda jail through the video conference. 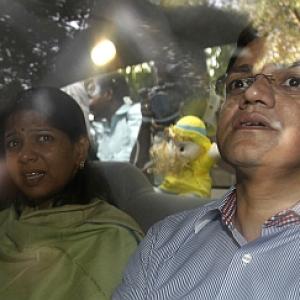