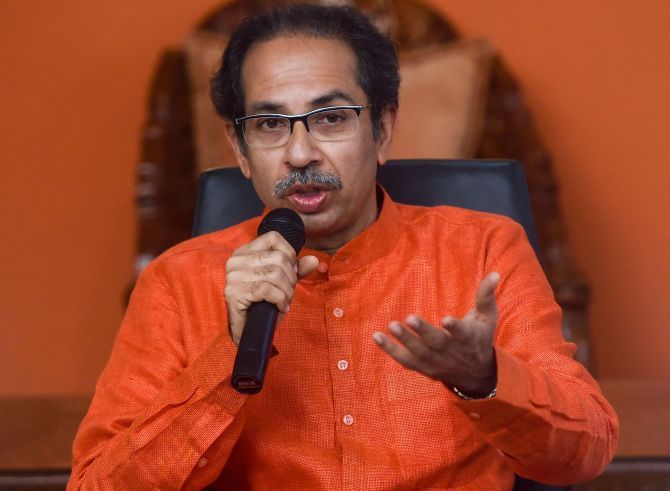 Thackeray and Pawar held parleys at a suburban hotel ahead of the 7.30 pm deadline set by Governor Bhagat Singh Koshyari for the Sena to stake claim for government formation.

During their 45-minute meeting, the two leaders also discussed the 'common minimum programme', including the agrarian issue, that will guide the action of their government in case it is formed, the sources said.

The NCP has not yet announced its decision on whether it will support the Shiv Sena, and said it will take a call based on the steps its ally Congress takes.

The Congress' top leaders will be meeting the Maharashtra party leaders in Delhi at 4 pm to decide which way the party will go amid the deadlock.

The Sena, the second-largest party in the 288-member House with 56 MLAs after the Bharatiya Janata Party, which has 105 members, has time till 7.30 pm to stake claim on government formation.

In the morning, Union Heavy Industries Minister and Shiv Sena leader Arvind Sawant announced his decision to quit the National Democratic Alliance government at the Centre.

This came after NCP leader Sharad Pawar said the Shiv Sena will have to first sever ties with the NDA for his party to take a call on supporting it.

The Congress has already deliberated on the political situation in Maharastra at a meeting of its Working Committee.

"We will sit again at 4 pm and will decide on the issue after a meeting with our state leaders," All India Congress Committee general secretary in-charge of Maharashtra Mallikarjun Kharge said after the Congress Working Committee meeting.

The CWC is the highest decision-making body of the party.

Sources said since the Congress MLAs are not keen on fresh elections and want to keep the BJP out of power, they favour extending outside support to the Sena.

Kharge said leaders from the state will give their views to the top leadership and the party will decide on its course of action after that.

"We have always maintained distance from the right-wing party which is the Shiv Sena.

In Mumbai, NCP leader Nawab Malik said it is the responsibility of 'all of us' to give an alternative considering the plight of people in the state.

He, however, said the NCP will take any decision in consensus with its ally the Congress in the evening.

He also said communication between the Shiv Sena and NCP was on.

"It is the responsibility of us all to provide an alternative given the plight of the people and farmers. We are expecting a decision from the Congress. If there is a consensus, we will proceed towards government formation," the NCP chief spokesperson said.