Security beefed up in Valley ahead of I-Day celebrations 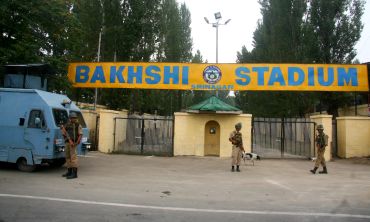 Authorities have sounded a general alert across Jammu and Kashmir to ensure a peaceful Independence Day on Wednesday.

Security across Kashmir and in Jammu region has been beefed up following recent spurt in militant activities in the Valley where militants carried out several grenade attacks and killed a retired deputy superintendent of police in the past ten days.

Tension in capital Srinagar is palpable where security forces have set up barricades on routes leading to the Bakshi stadium, venue of the main Independence Day function on Wednesday.

The barricades are manned by the police and paramilitary Central Reserve Police Force troops who are subjecting passing vehicles to security checks.

Body frisking of pedestrians is being carried out in the market places.

"I am seeing this kind of security bandobust after a long time serving as reminder of the past when militancy was at the peak in Kashmir," said Mehraj-ud-Din, a local.

A senior police officer said security checks had to be intensified because of the recent incidents. "Last year such arrangements were not required as the situation was by and large peaceful."

Security barricades have also been erected on the national highway where all vehicles Srinagar are being searched.

The Bakhshi stadium, where Chief Minister Omar Abdullah will unfurl the Tricolour and take salute, has been almost sealed a day earlier.

Sharp shooters have been positioned on the high rise buildings around the stadium.

The state police chief, Ashok Prasad, told mediapersons that fool proof security arrangements were in place in the state and 'there was no danger of any untoward incidents'.

Various separatist groups have called for a protest shutdown on Wednesday.

Image: The Bakhshi stadium, where Chief Minister Omar Abdullah will unfurl the Tricolour and take salute, has been almost sealed a day earlier.