Four days ahead of the start of the peak pilgrimage season in Sabarimala, the Supreme Court on Tuesday agreed to review its verdict that allowed entry of women of all age groups to the hilltop temple in Kerala which had sparked violent protests but refused to grant a stay. 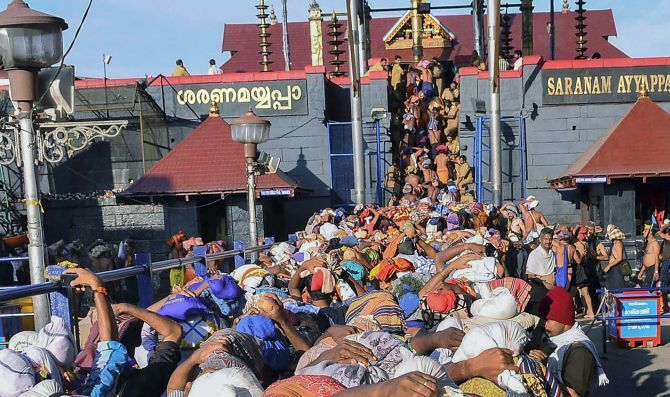 With no stay being given, it remains to be seen whether girls and women in the previously banned 10-50 age group will be able to enter the shrine after a 6-km arduous trek since attempts by some were foiled by protesters at the base camps in Nilakkal and Pamba when the shrine was opened for 8 days in two spells after the September 28 verdict.

The two-month long Mandala Makaravillakku pilgrim season commences on November 17 and attracts millions of devotees from all over the country.

The order to admit and setting the date for hearing on January 22 in open court the 48 review petitions seeking a reversal of the verdict was welcomed by the Bharatiya Janata Party, the Congress and the priests at the Ayyappa temple in Sabarimala.

The apex court does not hear review petitions in open court except in the cases of capital punishment.

Kerala Chief Minister Pinarayi Vijayan on his part said though the Supreme Court has not stayed its September 28 verdict his government would take a final call on the issue after consulting legal experts.

An all-party meeting has also been convened by the state government on November 15 to discuss issues to Sabarimala, an official said.

In all, 48 review petitions were filed following the recent violent protests in favour of and against the verdict.

On September 28, a five-judge constitution bench headed by then Chief Justice Dipak Misra, in its 4:1 verdict, lifted the centuries-old ban on girls and women in the 10-50 age group from entering the shrine, saying it amounted to gender discrimination.

The review petitions against the verdict were taken up 'in-chamber' by a bench of Chief Justice Ranjan Gogoi and Justices R F Nariman, A M Khanwilkar, D Y Chandrachud and Indu Malhotra.

"All the Review Petitions along with all pending applications will be heard in Open Court on 22nd January, 2019 before the appropriate Bench. We make it clear that there is no stay of the judgment and order of this Court dated 28th September, 2018," the order said.

In the in-chamber proceedings, the judges examined the review petitions by circulation and lawyers were not present.

Earlier in the day, the top court made it clear that fresh pleas related to the Sabarimala issue will be heard only after it decides the earlier petitions seeking review of the judgment.

The top court on October 9 declined an urgent hearing on the review plea filed by an association which had contended that the five-judge Constitution bench's verdict lifting the ban was 'absolutely untenable and irrational'.

A plea filed by the National Ayyappa Devotees Association (NADA), which has sought review of the verdict, said: "The notion that the judgment under review is revolutionary, one which removes the stigma or the concept of dirt or pollution associated with menstruation, is unfounded."

Besides the association, several other petitions, including one by the Nair Service Society (NSS), have been filed against the apex court verdict.

"We will consult legal experts on the matter", Vijayan said when asked if the verdict would be implemented during the Mandala Makaravillakku pilgrim season.

Sabarimala temple head priest Tantri Kandararu Rajeevaru hailed the decision to hear the review petitions as a 'big victory' and said this was due to the blessings of Lord Ayyappa.

"The blessings of Lord Ayyappa and prayers of lots of devotees are behind this decision to hear the matter in the open court", a beaming Tantri told reporters.

"I think it is a very good decision. I think Kerala is united on this issue and therefore, I am happy that the Supreme Court has decided to review the entire issue," Alphons, a BJP leader from Kerala, said.

Opposition leader in the Kerala assembly Ramesh Chennithala wanted the state government to shed its 'stubbornness' in implementing the September 28 verdict.

"The Communist Party of India (Marxist)-led Left Democratic Front government should act maturely and not implement the decision during the upcoming two-month long pilgrim season," he told reporters at Sabarimala.

"We welcome the apex court's decision to hear the review petition in open court. Though there is no stay, the government must act maturely and not implement the order,allowing entry of women," he said.

BJP state president P S Sreedharan Pillai, who undertook a rath yatra from Kasargod in north Kerala to Pathanamthitta, where Sabarimala is situated, to 'protect' the Lord Ayyappa temple's traditions, described the apex court decision as a 'good step'.

"We accept the spirit of today's Supreme Court decision," he said.

CPI-M state secretary Kodiyeri Balakrishnan said the government would implement whatever decision the apex court takes on the issue of women's entry into the hill top shrine.

"The government will evaluate the situation and take an appropriate decision", he said. 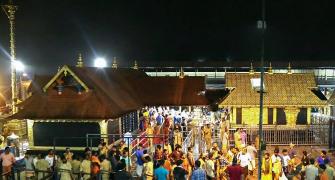