The Supreme Court on Friday paved the way for the reopening of State-owned liquor vends in Tamil Nadu by staying a Madras high court order which had ordered their closure for the time being on the ground that there was violation of guidelines, such as social distancing, meant to contain the COVID-19 pandemic. 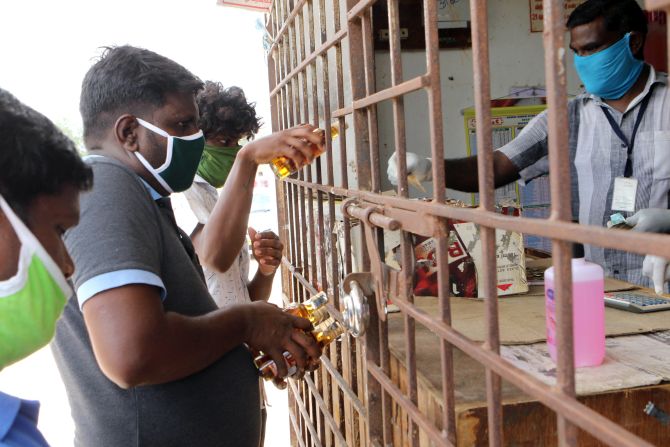 A bench comprising Justices L Nageswara Rao, S K Kaul and B R Gavai, in the proceedings held through video conferencing, stayed the May 8 order of the high court after taking note of the appeal of state government's firm, Tamil Nadu State Marketing Corporation (TASMAC), which sells alcoholic beverages in the state.

Senior advocate Mukul Rohtagi, appearing for TASMAC, said the high court should not have imposed its own conditions for sale of liquor by entering into the State's domain of policy-making.

He said that it was the State's prerogative to decide how to conduct sale of liquor and contended that the high court cannot decide the mode of selling.

“We do not have tender services, it is impossible. How can we sell online? There are many issues regarding adulteration and other such considerations. How can we trust someone to carry liquor?” Rohatgi asked.

Lawyer PV Yogeswaran, appearing for the persons who had moved the high court, said sale of liquor was not a fundamental right and precautionary measures must be taken in view of the COVID-19 pandemic. He urged the bench not to intervene in the matter.

The Tamil Nadu government on May 8 had moved the top court challenging the high court order saying that the closure of such shops would lead to "grave losses" in state's revenue and complete halt in commercial activities.

The high court had ordered the closure of liquor outlets, noting that there were huge crowds and no social distancing was being maintained by tipplers. It, however, had allowed doorstep delivery of alcohol through online mode.

The state government firm, in its appeal, termed the high court order a case of "judicial overreach" and said online sale and home delivery of alcohol were not possible in the entire state.

"It is pertinent that online modes of effective liquor sales are not even available in the vast majority of the state at present and can only be implemented after following the due procedures under law," TASMAC said in the appeal.

"It is pertinent that in the state of Tamil Nadu all liquor retail is owned and operated by TASMAC, thus the net effect of the high court's order is complete and indefinite standstill of the sale of liquor in the state leading to grave losses to the state's revenue and commercial activity in the state," the plea said.

TASMAC said that there was as many as 10 PILs pending in the high court on the issue and it has "reasons to believe that the entire batch of writ petitions if not some have been filed by vested private interest, so has to make enormous commercial gains, from the unfortunate situation."

The state government firm referred to the apex court's observation in which it had asked states to consider non-direct contact or online sales and home delivery of liquor during the lockdown period to prevent the spread of the novel coronavirus.

"The high court in passing the impugned judgment has bypassed and misinterpreted the order dated May 08, passed by a three member-bench of this (Supreme) Court...in which this court (SC) declined to direct states to close down liquor stores pending the lockdown and left it to each state's discretion to consider non-direct sale including online sale/home delivery of liquor," it said.

"The Supreme Court order recognised that states have a broad margin of power to determine whether and how to effect sales of liquor in this lockdown period and therefore, the impugned judgment, is a clear case of judicial overreach and is not sustainable in light of the Supreme Court Order,” the plea said.

The appeal said that the state government decided to open the liquor shops on May 5 after keeping in mind the directives issued by the ministry of home affairs on May 1 allowing the sale of liquor in the state subject to restrictions such as ensuring social distancing.

Some of the petitioners, on whose plea the HC ordered the closure of liquor vends in the state, had also moved the apex court by filing a caveat to ensure that they be also heard if the top court passes any order on the plea of TASMAC.

The high court order restraining sale of liquor over the counter was passed on a petition filed by advocate G Rajesh, besides a plaint from the actor Kamal Haasan-led Makkal Needhi Maiam (MNM).

The high court had said there was total violation of its interim order, when it declined to stay a government order allowing resumption of sale of liquor through outlets.

After a dry spell of 43 days due to the COVID-19 lockdown since late March, liquor sales resumed at TASMAC outlets in Tamil Nadu, except in state capital Chennai, on May 7.

Heavy rush was witnessed at most places with people standing in serpentine queues even as the move to allow sale of liquor came in for flak from opposition parties and others, who raised apprehensions that it would lead to further spread of the novel coronavirus, which as of May 8 has affected over 6,000 people in the state.

Tamil Nadu had decided to open retail liquor outlets, citing relaxation of lockdown norms by the central government. Tipplers in border districts of the state were also making a beeline to neighbouring Andhra Pradesh and Karnataka where liquor sales resumed on May 4.