The Supreme Court on Friday recalled its March 19 order seeking response of the Nanavati Commission and the Gujarat government on a plea for direction to the panel to summon Chief Minister Narendra Modi for questioning in connection with the 2002 riots.

A bench of justices D K Jain and A K Dave on Friday said, "We are recalling our order dated March 19, 2012" and posted the matter for fresh hearing on Monday.

The apex court passed the order after informing senior counsel Collin Gonsalves that it had assumed that the matter related to two other petitions on the Godhra riots as it was "misled" by certain submission made before it.

On March 19, the apex court had issued notices to the commission and the state government, asking them to file their responses within four weeks

The bench's order had come on a petition of Jan Sangarsh Manch (JSM), an NGO, seeking direction to the commission to call Modi for questioning after its plea was dismissed by the Gujarat High Court.

The NGO submitted that Modi should be summoned by the commission as the role of the chief minister falls within the ambit of the probe panel's inquiry.

Nanavati Commission was formed in 2002 after post-Godhra train carnage riots. In 2004, the terms of reference of the commission had been expanded to include in its purview an examination of the chief minister's role in the riots.

In September 2009, the commission had rejected JSM's plea to summon of Modi and five others for cross-examination with regard to the communal violence in which over 1,000 people were killed.

The Supreme Court-appointed Special Investigation Team had earlier questioned Modi on 2002 riots for over 10 hours in 2010.

In November 2009, the NGO had moved the high court for quashing of the order but a bench of Justice K S Jhaveri had dismissed its plea, terming it as "premature".

In 2010, the JSM filed an appeal before the high court's division bench against the single judge's order.

The NGO had argued that summoning Modi and others was required for collecting evidence with regard to the Godhra train burning incident and the riots.

The state government had opposed the JSM's plea contending that the NGO had no locus standi to seek summoning of Modi. It had submitted the appeal is not maintainable under law as the Commission of Inquiry Act does not allow any third party to demand for questioning of any person.

It had said it is for the commission to decide whom it should call for questioning. 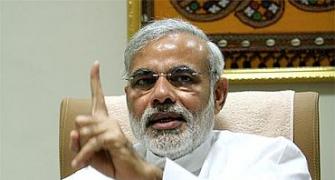 'Guj riot report should be given to guv, not Modi'
Is 2012 witnessing the birth of the Fourth Front?

Bhatt gets relief from Guj HC in 1990 case