The Supreme Court on Thursday quashed the controversial skin-to-skin judgment of the Bombay high court in a case under the POCSO Act, saying the most important ingredient constituting sexual assault is sexual intent and not skin-to-skin contact with the child. 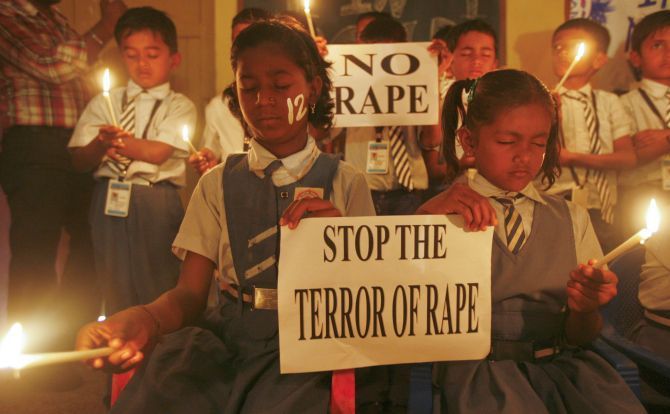 The high court had held that no offence of sexual assault under the POCSO Act is made out if there is no direct skin-to-skin contact between an accused and victim.

A bench headed by Justice U U Lalit set aside the high court judgment, and said the act of touching the sexual part of the body or any other act involving physical contact if done with sexual intent would amount to sexual assault within the meaning of section 7 of the POCSO Act.

Purpose of the law cannot be to allow the offender to sneak out of the meshes of the law, the apex court said.

"We have held that when the legislature has expressed clear intention, the courts cannot manufacture ambiguity in the provision. It is right that courts cannot be overzealous in searching ambiguity," the bench, also comprising Justices S Ravindra Bhat and Bela M Trivedi, said.

"The most important ingredient for constituting the offence of sexual assault is sexual intent and not skin-to-skin contact with the child. Construction of a rule should give effect to the rule rather than destroying it. Any narrow interpretation of the provision which would defeat its object cannot be accepted. The intention of the legislature cannot be given effect unless wider interpretation is given," the bench said.

The apex court said this is the first time that the attorney general had filed an appeal on the criminal side.

The apex court said this time a brother and sister have also opposed each other.

Attorney General K K Venugopal had earlier told the apex court that the controversial verdict would set a "dangerous and outrageous precedent" and needed to be reversed.

The top court, which was hearing separate appeals of the attorney general and the National Commission for Women (NCW), had on January 27 stayed the order which had acquitted a man under the Protection of Children from Sexual Offences (POCSO) Act saying groping a minor's breast without skin-to-skin contact cannot be termed as sexual assault .

The verdict had said that groping a minor's breast without skin-to-skin contact cannot be termed as sexual assault as defined under the POCSO Act.

It had said that since the man groped the child without removing her clothes the offence cannot be termed as sexual assault but it does constitute the offence of outraging a woman's modesty under IPC section 354.

The high court had modified the order of a sessions court, which had sentenced a 39-year-old man to three years of imprisonment for sexually assaulting a 12-year-old girl.

The verdict had further held that mere groping will not fall under the definition of sexual assault. As per the prosecution and the minor victim's testimony in court, in December 2016, the accused, one Satish, had taken the girl to his house in Nagpur on the pretext of giving her something to eat.

Once there, he groped her breast and attempted to remove her clothes, the high court had recorded in the verdict.

However, since he groped her without removing her clothes, the offence cannot be termed as sexual assault and, instead, constitutes the offence of outraging a woman's modesty under IPC section 354, the high court had held.

The sessions court had sentenced the man to three years of imprisonment for the offences under the POCSO Act as also under IPC section 354. The sentences were to run concurrently.

The high court, however, acquitted him under the POCSO Act while upholding his conviction under IPC section 354.

Source: PTI© Copyright 2022 PTI. All rights reserved. Republication or redistribution of PTI content, including by framing or similar means, is expressly prohibited without the prior written consent.
Related News: POCSO, IPC, Justice U U Lalit, Bombay HC, Bela M Trivedi
Print this article