The Supreme Court on Wednesday asked the Centre to explain the eight-year delay in deciding the mercy plea of terrorist Devender Pal Singh Bhullar, who was awarded the death penalty for triggering a bomb blast in New Delhi in September 1993 that killed nine people.

A bench headed by Justice G S Singhvi asked the Centre to file an affidavit by October 10 to explain the delay in deciding Bhullar's mercy plea of 2003, rejected by the President in 2011.

"Everybody is anxious to know what happened during these eight years. What happened between 2003 and 2011," the court said while asking the government to file its response.

Bhullar was sentenced to death by a TADA court on August 25, 2001 for his role in the September 10, 1993 bomb blast in Delhi. He had targeted the cavalcade of then Youth Congress president Maninderjit Singh Bitta, who managed to escape with serious injuries, though nine security personnel were killed in the blast.

The Supreme Court had on March 26, 2002 dismissed Bhullar's appeal against the death sentence.

Bhullar, meanwhile, had filed a mercy petition before the President on January 14, 2003.

The President, after a lapse of over eight years, dismissed his mercy plea on May 25 this year.

Bhullar is currently undergoing treatment at the Institute of Human Behaviour and Allied Sciences in Shahdara for hypertension, psychiatric illness and suicidal tendencies.

In a petition to the apex court, his wife Navneet Kaur has contended that the May 25 order of the President ought to be quashed as "the same suffers from lack of application of mind, non-consideration of relevant circumstances and presumably having been made on extraneous grounds."

She has also pleaded for altering his death penalty to a life sentence, saying it would be "inhuman and violative of Article 21 of the Constitution" to carry out his execution.

Kaur claimed that Bhullar has become "mentally retarded" due to the delay of over 5,700 days in deciding his mercy plea. She claimed the last time she met him at IHBAS, she found him to be quiet, withdrawn and unwilling to talk.

"His condition has continued to deteriorate since his conviction in 2003. Earlier, she thought he was only suffering from hypertension and arthritis but now she realises the psychotic symptoms with suicidal tendencies are a by-product of suffering a slow death on account of being a condemned prisoner since 2001," her plea stated.

"The execution of a mentally retarded prisoner is considered to be cruel and inhuman and should be deemed to be prohibited under Article 21 of the Constitution of India. In the US, there is a national consensus that mentally retarded persons are excluded from execution because it can neither serve as retribution nor as deterrence," said the petition.

Kaur cited the apex court's ruling in the Triveniben Vs State of Gujarat (1989) case -- that undue delay in the execution of death sentence entitles the condemned prisoner under Article 32 of the Constitution to approach court that his death sentence be commuted to life imprisonment. 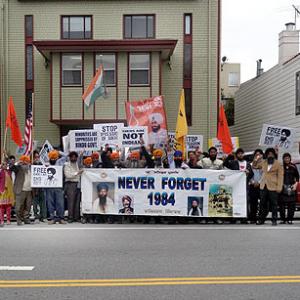 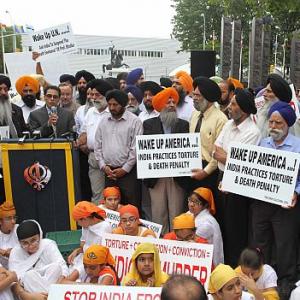