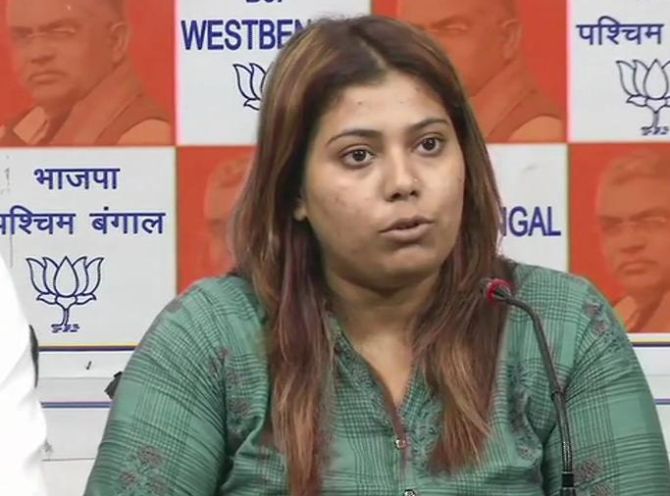 The Supreme Court on Monday issued show cause notice to West Bengal government on a contempt plea for delay by a day in releasing on bail a Bharatiya Janata Party activist who was arrested last month for allegedly posting Chief Minister Mamata Banerjee's meme on social media.

It has been alleged in the petition that there was a delay in releasing BJP member Priyanka Sharma despite the apex court's order granting bail to her.

A vacation bench of the apex court had on May 14 directed immediate release of Sharma, a BJP Yuva Morcha leader, on bail but she was released on May 15.

She was arrested on May 10 by the West Bengal Police under section 500 (defamation) of the Indian Penal Code (IPC) and under the provisions of the Information Technology Act on a complaint by a local Trinamool Congress leader for allegedly posting the meme on Banerjee on social media.

Section 500 of the IPC entails punishment for defamation with simple imprisonment for a term which may extend to two years, or with fine, or with both.

On Monday, the contempt plea filed by Rajib Sharma, brother of the BJP activist, came up for hearing before a bench headed by Chief Justice Ranjan Gogoi.

The bench, also comprising Justices Deepak Gupta and Aniruddha Bose, issued notice to the state government and others on the plea and posted the matter for hearing after four weeks.

Rajib Sharma approached the apex court alleging that there was a delay of over 24 hours in releasing his sister from jail, despite the court's May 14 order.

He has alleged that during the hearing in the apex court on May 14, the state government had suppressed the fact that a closure report was filed in the case before the concerned trial court on May 13 itself.

A vacation bench of the top court had on May 14 granted her bail and directed her to tender a 'written apology' at the time of her release from jail for sharing the meme on Banerjee, saying that freedom of speech of an individual ends when it infringes upon others' rights.

She was earlier sent to 14-day judicial custody by a trial court there.

On May 15, the counsel appearing for Rajib Sharma had informed the vacation bench that she was not released from jail on May 14 despite the court's order granting her bail and ordering her immediate release.

However, the counsel for West Bengal government had informed the bench that she was released from jail at 9:40 am on May 15.

"If she is not released, the consequences will follow," the bench had said on May 15 and warned it will issue contempt to officials concerned if Sharma was not released from jail immediately.

Priyanka Sharma had allegedly shared on Facebook the photo in which Banerjee's face has been photo-shopped on to actor Priyanka Chopra's picture from the MET Gala event in New York.