News
Business
Movies
Sports
Cricket
Get Ahead
Money Tips
Shopping
Sign in  |  Create a Rediffmail account
Rediff.com  » News » 'What kind of petition is this?' SC flays defective pleas on Art 370

'What kind of petition is this?' SC flays defective pleas on Art 370

The Supreme Court on Friday refrained from examining the legal challenges posed to the changes made in the constitutional status of Jammu and Kashmir, saying that the petitions filed on the 'serious issue' of abrogation of provisions of Article 370 of the Constitution suffer from defects.

The apex court, which was dealing with the first petition filed on August 6, a day after the decision to scrap Article 370 was announced, expressed its anguish that there have been six petitions on the issue and all were filed with the defects.

It pulled up advocate M L Sharma, the first petitioner on the issue, saying his petition has ‘no meaning’.

Chief Justice Ranjan Gogoi said he spent 30 minutes reading the petition but could not make out anything and also could not understand what was the prayer.

"What kind of petition is this? It could have been dismissed but there are five other pleas with the registry which are under defect," the bench also comprising Justices S A Bobde and S A Najeer said.

"You are not praying for setting aside the Presidential order. What is the prayer it is not clear. It can be dismissed on technical grounds. In a matter of this nature if this is the petition, there is no meaning," the bench said.

The apex court asked lawyers to cure defects in their six petitions on Article 370 and adjourned the hearing.

"The petitioner, who is appearing in person prays for leave to amend the writ petition. The leave as prayed for is granted. The matter be listed along with other connected matters, some of which are lying with defects.

"The Registry is directed to place the matter before the Chief Justice on the administrative side no sooner the defects are removed," the bench said in the order.

During the hearing, advocate Shakil Sabeer said he was a resident of Jammu and Kashmir and had filed the petition against the scrapping of Article 370 and the creation of union territories of J-K and Ladakh.

He said he had cured the defects but the petition was not listed.

The bench enquired from the apex court registry and found that the defects were cured only on Wednesday evening.

The bench said the defects were cured on Wednesday evening and Thursday was a holiday. Then how did he expect the listing of his petition on Friday?

"Why did you file a defective petition in the matter of this importance," an anguished bench asked the lawyer.

"You file a defective petition and trouble my officers," the CJI said.

The bench asked the lawyer if he knows how many petitions on the J-K issue are in the apex court and are under defects?

The bench told him that six petitions have been filed on the issue.

"In the matter of this seriousness, people are filing petitions with defect," the bench said.

The National Conference, a political party in Jammu and Kashmir, has also filed a petition posing legal challenges in the apex court to the changes made in the constitutional status of J-K, contending that these have taken away rights of its citizens without their mandate.

Arguing that the legislation approved by Parliament and orders issued by the President subsequently were ‘unconstitutional’, the petition prayed for these to be declared as ‘void and inoperative’.

The petition has been filed by Mohammad AKbar Lone and Justice (rtd) Hasnain Masoodi, both Lok Sabha members belonging to the NC.

Some other individuals have also filed a petition in the Supreme Court but they were not listed for hearing on Friday. 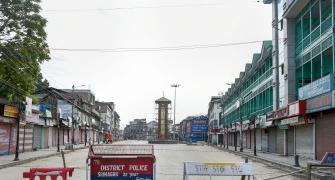