The Supreme Court on Tuesday extended the deadline for publication of the final National Register of Citizens in Assam by a month to August 31 while rejecting the pleas seeking permission for 20 per cent sample re-verification. 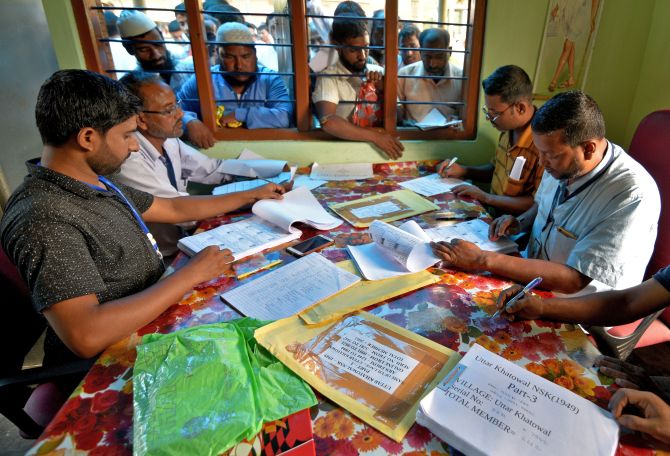 The Centre and the Assam government had sought permission for sample re-verification to find out wrongful inclusions, especially in districts bordering Bangladesh, and exclusions of persons in the NRC which was to be published by July 31.

While dismissing the pleas of the Centre and the state, the apex court took note of the report of Assam NRC coordinator Prateek Hajela that in the course of consideration and adjudication of the claims, of those who have been left out in the draft NRC, re-verification of 27 per cent persons has already been done.

The top court, which had been reiterating that it will not extend the deadline for publication of the final NRC, took note of the report and the reasons for seeking extension put forth by the Assam NRC coordinator and allowed him to finish the task by August 31.

"We take the view that having regard to the grounds on which the coordinator in his report of July 10 has sought for extension of time up to August 31 for publishing the final NRC, extension prayed for should be allowed. We accordingly grant the aforesaid extension of time," a bench of Chief Justice Ranjan Gogoi and Justice R F Nariman said.

Attorney General K K Venugopal and Solicitor General Tushar Mehta, representing Centre and the state respectively, vehemently contended that re-verification of 20 per cent people was needed as the infiltration had been the key issue with locals and it was one of the aspects in the Assam-Centre pact.

The court however went by the report of state coordinator and said: "We have taken note of our previous order..., whereby we had kept the issue alive. We have also read and considered the response of Hajela, the coordinator on this aspect of the matter and specifically, the stand taken by him..., which is to the effect that in the course of consideration/adjudication of the claims, re-verification to the extent of 27 per cent has already been done."

In fact, in the report of the coordinator has mentioned district wise figures of such re-verification which has become an integral part of the process of consideration of the claims and objections on account of the procedure adopted, it said.

"In that view of the matter, we do not consider it necessary to accede to the prayers for a further sample verification as prayed for on behalf of the Union of India and the state of Assam," the bench said in its order.

Both the governments had on July 19 told the top court that "India cannot be the refugee capital of the world" and sought extension of its deadline of July 31 to complete the Assam NRC.

They had sought directions to conduct sample reverification to quell a growing perception that many illegal immigrants may have infiltrated the NRC especially in districts bordering Bangladesh.

Both the governments told the apex court that several lakh people have been wrongfully included in the NRC, specially in districts bordering Bangladesh due to the involvement of local officers in the massive exercise.

The Centre's plea also sought a direction that such re-verification exercise be conducted by Class I officers of the state government from other districts who have knowledge and experience of handling the process of enquiry/investigation.

The pleas of both the governments also sought a direction to fix the venue of the sample re-verification at a place which was not in the vicinity of the initial NRC verification to rule out possibility of local influences, bias and threat.

They claimed that names of Indian citizens were excluded and illegal Bangladeshi migrants were included in the draft.

They also referred to the apex court's 2018 order by which it had said it could consider a re-verification of 10 percent of the people who were included in the draft NRC.

The top court had termed the issue as "human problem with great magnitude" and asked the state NRC coordinator to submit a report in a sealed cover on the ramification of allowing the claimants to file new sets of legacy documents.

The first draft of the NRC for Assam was published on the intervening night of December 31, 2017 and January 1, 2018 in accordance with the top court's direction. Names of 1.9 crore people out of the 3.29 crore applicants were incorporated then.