Terming the Supreme Court's decision to strike down reservation for the Maratha community in Maharashtra as unfortunate, Chief Minister Uddhav Thackeray on Wednesday said he was requesting the Centre 'with folded hands' to step in, showing the same urgency as it did in the case of Article 370 and some other matters. As the SC struck down the 2018 law, giving quota in government jobs and education to the Marathas, by terming it 'unconstitutional', a political slugfest broke out over the sensitive issue in Maharashtra where the opposition Bharatiya Janata Party and leaders of the ruling Maha Vikas Aghadi blamed each other for the setback in the apex court.

Thackeray, perhaps realising the potential adverse fallout of the SC order in the state, requested the Centre to step in immediately and sort out the quota issue for the Maratha community, which forms a large chunk of Maharashtra's population.

In a statement after the apex court verdict, Thackeray said, 'With folded hands, we request the prime minister and the president to take an immediate decision on Maratha quota.'

In the past, the Union government has even amended the Constitution to bolster its decisions and similar alacrity should be shown to give reservation to the Maratha community, he said.

He also made an appeal to people in the state to maintain peace.

The decision to give reservation to the community had been taken unanimously by both houses of the Maharashtra legislature and was based on the Gaikwad commission's recommendations, but the apex court nullified it on the ground that the state has no right to offer such quota, he said.

The Union government should show the same urgency to help the community now as it did in the case of Article 370, 'Shah Bano case' and the SC/ST (Prevention of Atrocities) Act, Thackeray said.

He was apparently referring to laws or constitutional amendments enacted by the Narendra Modi government to abrogate Article 370, penalize triple talaq and restore stringent provisions of the Scheduled Castes and Scheduled Tribes (Prevention of Atrocities) Act which a SC ruling had diluted.

"The SC's decision can not be welcomed but nobody should try to incite people. Efforts will continue till we win the reservation case," the statement quoted the CM as saying.

The Maharashtra State Reservation (of seats for admission in educational institutions in the State and for appointments in the public services and posts under the State) for Socially and Educationally Backward Classes (SEBC) Act 2018 was enacted to grant reservation to people of the Maratha community.

State minister Ashok Chavan criticised BJP leader and former chief minister Devendra Fadnavis, under whose stewardship the quota law was enacted, for passing the SEBC Act in 2018 without 'due rights'.

The Congress minister, who heads a sub-committee on the Maratha quota, claimed Union law minister (Ravi Shankar Prasad) had refused to meet Thackeray virtually to discuss the quota issue.

Another minister in the MVA government and Nationalist Congress Party chief spokesperson Nawab Malik said, "The ball of Maratha reservation is now in the Centre's court. The state government is ready to submit a recommendation of awarding reservation to the Maratha community."

"Either the Union government reinstate the state's rights to grant reservations through the court as assured on the floor of Parliament or it should set up a backward (classes) commission. The state government will submit its recommendations seeking reservation for the Maratha community to the commission," Malik added.

Malik alleged the BJP and Fadnavis, who is the Leader of Opposition in the Legislative Assembly, are against the Maratha quota.

The NCP leader said the state government was ready to continue the legal battle for the Maratha quota, but after the SC order, it is the Centre's responsibility to take forward the issue.

However, the BJP blamed the Shiv Sena-NCP-Congress government for 'failing' to convince the Supreme Court over the issue of reservation for the Maratha community.

Expressing disappointment over the SC's decision, Fadnavis claimed there was a 'lack of co-ordination' on part of the state government while making its submissions before the apex court.

"Two or three times, the government's lawyers had to say before the court that they did not receive certain information and instructions, which led to adjournment of the case hearings," he told reporters in Nagpur.

Fadnavis said many other states have exceeded the SC-mandated reservation cap of 50 per cent.

"There are many things about which we could have convinced the court...but the state government focused on some other aspects," the leader of opposition in the state assembly said.

Fadnavis appealed to the state government to form a committee of senior legal experts to study the SC's decision and find a way out to give justice to the Maratha community.

Union Minister of State for Social Justice Ramdas Athawale said the Centre should provide separate reservation to 'Kshatriya communities' such as Marathas, Jats, Rajputs and Reddys.

Commenting on the SC's judgement striking down the law granting quota in government jobs and education to the Marathas, Athawale alleged that the Shiv Sena-led government did not present its case properly.

"I am going to write to Prime Minister Narendra Modi requesting reservations for members of Maratha and other Kshatriya communities like Jats, Rajputs and Reddys who have income of up to Rs 8 lakh," Athawale said.

Maharashtra BJP president Chandrakant Patil demanded that the MVA government call an all-party meeting and a special session of the Assembly to discuss the issue.

"It is a complete failure of the state government. It failed to convince the SC on why it was important to breach the 50 per cent ceiling on quota under extraordinary circumstances in the state with regard to the Maratha community," Patil told reporters in Pune.

Leader of Opposition in the Legislative Council Pravin Darekar of the BJP said the decision has come as a 'complete disappointment' for the Maratha community.

Vinod Patil, one of the petitioners seeking reservation for the Marathas, termed the decision as 'unfortunate'.

The SC, while quashing the quota law, held that there were no exceptional circumstances to justify breach of the 50 per cent reservation cap set by the 1992 Mandal verdict. 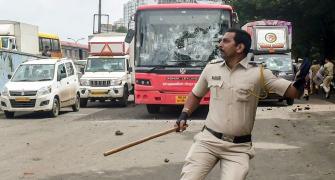 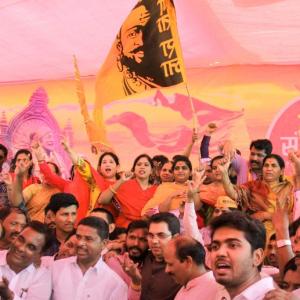