Source: PTI
August 29, 2012 19:24 IST
Extending the ban on tourism in core tiger reserve areas till September 27, the Supreme Court on Wednesday indicated it was not averse to permit regulated tourist activities, subject to the Centre evolving suitable revised guidelines to protect the depleting wild cat.

A bench of justices A K Patnaik and Swatanter Kumar granted four weeks to the Centre to evolve the fresh guidelines after consultations with states, all stakeholders, hotel associations affected by the ban, guides and tour operators.

On July 24 the apex court had banned all tourism activities in the core tiger reserve areas.

"There is always a watch when tourism is allowed. If there is no tourism there will be no humans to watch the tigers. Poachers will immediately be caught by tourists and the guides. Poachers actually work undercover. If no tourists are allowed, it will be a field day for poachers," the bench told Attorney General GE Vahanvati, who agreed with the observations.

The apex court passed the observation after the AG sought permission to revise the existing guidelines to ensure that tigers were protected even while tourism is promoted.

During the nearly hour-long hearing the bench asked the Centre whether the existing tiger conservation guidelines envisage a complete ban on all activities inside core areas.

The Centre submitted that the rules did not envisage a complete ban, rather provided for 20 per cent activities inside the core areas. "There seems to be some kind of clash, some kind of difference of opinion between the Centre and the states. Please ensure these are resolved. Also identify which activities shall be allowed and not allowed inside core areas," the bench observed adding it wanted comprehensive guidelines to promote both growth of tiger population and regulated tourism," the order said.

The bench asked the AG to ensure regulated tourism as hundreds of vehicles are trooping in an out of the core areas. "It has been a free for all till now. Is it necessary to take 100 vehicles into the core areas," the apex court wondered.

Senior counsel Dushyant Dave, appearing for Rajasthan and states like Madhya Pradesh, urged the court to immediately lift the ban to ensure that the parks are opened by October 1, 2012.

The counsel cited instances of Uganda, Kenya and certain other countries to claim that tourism regenerates wildlife and that there was no justification for the apex court to ban it.

Another senior counsel Ranjit Kumar, appearing for the Hotel Association of India, maintained that tourists did not venture into the core areas, but were only taken on guided excursions for a short period of time. He lamented that in view of the ban hotels have had to cancel bookings from foreign countries and the livelihood of several lakh of people was at stake.

However, senior counsel Raj Panjwani, appearing for petitioner, Ajay Dubey, submitted that the Centre had failed to evolve a comprehensive plan for the past two decades.

The Centre had earlier filed an affidavit seeking permission to review the existing guidelines for conservation of tigers in the wake of the apex court's order banning tourism in core areas of tiger reserves.

The buffer zones constitute the fringe areas of tiger reserves up to a distance of 10 kms. There are an estimated over 1,700 tigers in the country. 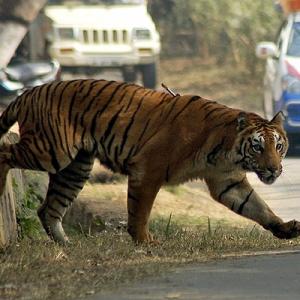