The Supreme Court on Wednesday termed as 'quite serious' the matter in which former Mumbai Police Commissioner Param Bir Singh has filed a plea against Maharashtra Home Minister Anil Deshmukh, but asked the Indian Police Service officer to approach the Bombay high court with his grievances. 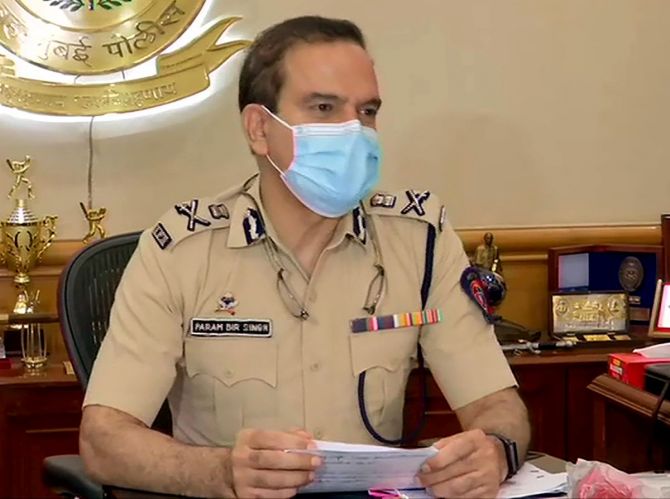 The apex court said both Singh and Deshmukh have levelled allegations and it appeared that lot of material which has come in public domain is a consequence of 'personas falling out' after parties in the matter being 'hunky-dory' for a long time.

A bench of Justices Sanjay Kishan Kaul and R Subhash Reddy granted liberty to Singh, who withdrew from the top court his plea seeking direction for an 'impartial and fair' CBI probe into alleged corrupt practices of Deshmukh, to approach the high court.

'We have no doubt that the matter is quite serious and affects the administration at large. It also appears that a lot of material which has come in public domain is a consequence of the personas falling out,' the bench said in its order.

Senior advocate Mukul Rohatgi, appearing for Singh, said they would file a petition before the high court during the day and would like the matter to be taken up on Thursday itself.

"That, in our view, would be an appropriate prayer made to the high court and not by a direction from this court," the bench said.

During the arguments conducted through video-conferencing, Rohatgi referred to the apex court's verdict in Prakash Singh case which dealt with police reforms.

"In our view, this is only a mantra recited periodically, wherever the occasion so suits, and there has been no seriousness by all concerned to ever implement the directions enshrined in the judgment," the bench said.

It said that directions given in Prakash Singh verdict were based on the principle of 'insulating police machinery from political/executive interference' to make it more efficient and to strengthen the rule of law.

'It appears that none want to give up, inter alia, the control of police transfers or implement measures that would insulate the police machinery from performing its role without any uncalled for interference,' it said.

At the outset, the bench asked Rohatgi as to why Deshmukh has not been impleaded as a party in the plea.

Rohatgi said it appears to be a 'mistake' and he is willing to forthwith implead Deshmukh as a respondent.

'Ordered accordingly. Amended memo of parties be filed during the course of the day,' it said.

NIA is probing the case related to the February 25 incident in which a car with explosives was found outside the house of India's richest man Mukesh Ambani leading to a bomb scare.

On the court's question as to why Singh has not approached the high court, Rohatgi said the matter is serious.

'We have no doubt that this is a serious matter,' the bench said, adding, 'But power of high court under Article 226 is wide. The high court can deal with it.'

'If investigation by an independent agency is being sought for, that is a relief which can also be granted by the high court. There have also been subsequent developments in the matter as has been noticed in terms of the report of Rashmi Shukla, Commissioner, State Intelligence Department. The high court has the requisite authority to address the same,' the bench noted in its order.

'In view of the aforesaid position, senior counsel for the petitioner seeks to withdraw the writ petition with liberty to approach the high court. Liberty granted,' the bench said.

During the hearing, the bench observed that the parties in the matter were 'hunky-dory' for a long time and now they have fallen apart after which the issue has come up.

Rohatgi claimed there was evidence in the form of CCTV footage, which was in the possession of ATS and that has not been handed over to the NIA.

Singh, a 1988 batch IPS officer, has also sought quashing of the order transferring him from the post of Mumbai's Commissioner of Police alleging it was 'arbitrary' and 'illegal'.

As an interim relief, he has sought stay of the operation of his transfer order and direction to state government, the Centre and CBI to immediately take in its custody the CCTV footage from residence of Deshmukh.

'The petitioner has invoked writ jurisdiction of this court to seek unbiased, uninfluenced, impartial and fair investigation in the corrupt malpractices of Anil Deshmukh, the Home Minister of Government of Maharashtra, before the evidences are destroyed,' he has said in his plea.

'Deshmukh had been holding meetings in February, 2021 at his residence with police officers including Sachin Vaze of Crime Intelligence Unit, Mumbai and Sanjay Patil, ACP Social Service Branch, Mumbai, bypassing their seniors and had instructed them that he had a target to accumulate Rs 100 crore every month and had directed to collect money from various establishments and other sources,' Singh has alleged. 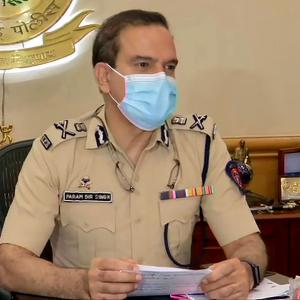