The Supreme Court on Thursday asked the Centre to apprise an 83-year-old mother quarterly about the steps taken to trace her son, Captain Sanjit Bhattacharjee, who has been missing in action and is said to be lodged in a jail in Pakistan for over 25 years.

A bench of Justices DY Chandrachud and JB Pardiwala noted that the petition has been moved by the aged mother of the army officer, who wants the government to take some steps to trace the whereabouts of her son.

"We impress upon the Union of India to take appropriate steps to trace the whereabouts of Captain Sanjit Bhattacharjee and apprise his mother on a quarterly basis about the steps taken", the bench said.

It noted the submission of additional solicitor general KM Nataraj that efforts are being made through diplomatic and other channels to know the whereabouts of Captain Sanjit Bhattacharjee.

Justice Pardiwala said had it been an ambush and the entire platoon come under an attack, then the situation could be understood but here is a case where only two persons of the platoon had gone missing and the rest returned.

"The rest, who have returned back to the base, must have known something about what happened. You try to find out from them at least she should know the status of her son,” the bench told Nataraj.

On May 12, the top court asked the Centre to file an updated status report about the steps taken to trace Captain Sanjit Bhattacharjee on the plea of his mother.

In its recent affidavit, the Centre in response to the plea said that there were 83 missing defence personnel including 62 prisoners of war from 1965 and 1971 whose release and repatriation India is seeking from Pakistan through diplomatic and other available channels.

The government through the ministry of external affairs has filed an affidavit on a plea that also sought direction to the Centre to take immediate steps through diplomatic channels for the repatriation of her son, who is lodged in jail in Pakistan for over 25 years.

The plea said that the petitioner had received information that Sanjit Bhattacharjee, who was commissioned as an officer of Gorkha Rifles regiment of the Indian Army in August 1992, was lodged in Lahore's Kot Lakhpat jail.

The petitioner said that her family was informed in April 1997 that her son, who had gone for patrolling duty at night time in Gujarat's Rann of Kutch, was apprehended by the Pakistan authorities while carrying out reconnaissance operation along the international border.

The government has attached the annexure of Note Verbale dated March 8, 2021, in which it referred to several Notes Verbales issued by the high commission of India in Pakistan and the list of 83 missing Indian defence personnel requesting to look into their whereabouts, and for the early release and repatriation of missing Indian defence personnel.

The Centre said in its affidavit said, ”It is respectfully submitted that the Government of India has been pursuing the case of Captain Sanjit Bhattacharjee regularly through diplomatic and other available channels.”

It said, "The high commission of India in Islamabad has been regularly taking up the matter with the Pakistan ministry of foreign affairs for ascertaining the whereabouts and early release and repatriation of missing defence personnel, believed to be in Pakistan's custody."

The affidavit filed by MEA said that the name of Captain Sanjit Bhattacharjee appears in the list of missing Indian defence personnel shared with Pakistan through various Notes Verbales issued by the high commission of India.

"However, the government of Pakistan has not acknowledged the presence of Captain Sanjit Bhattacharjee in its custody till date," the MEA said and annexed the latest Note Verbale dated March 8, 2021, addressed to the ministry of foreign affairs, Government of the Islamic Republic of Pakistan.

The government said that through the high commission of India, Islamabad is making every effort to get any information regarding Captain Sanjit Bhattacharjee, son of the petitioner.

"The Government of India will continue to raise the issue with the government of Pakistan, requesting it to respond on the status of Captain Sanjit Bhattacharjee," it said.

The government said that it will take all necessary steps through diplomatic and other available channels to trace the whereabouts of the petitioner's son and will keep her informed about the development in this regard.

Bhattacharjee said that she had received a letter dated May 31, 2010, from a major general, who was the then military secretary to the President, which informed her that Sanjit Bhattacharjee's name had been added to the existing missing prisoners of war (POWs) list.

The plea said she was informed that the issue of missing defence personnel was taken up with Pakistani authorities several times at the highest level, including during the Agra summit in July 2001, but the officials of Pakistan had informed that Sanjit could not be traced. 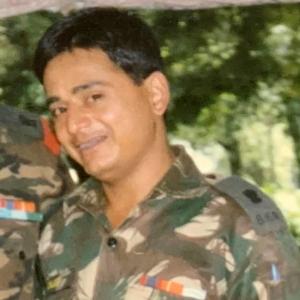