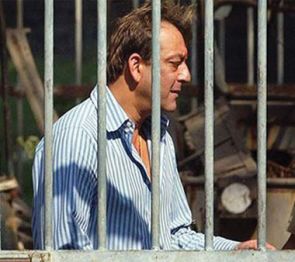 Actor Sanjay Dutt, who was on a leave of furlough, returned to the Yerawada prison in Pune on Wednesday morning to serve his remaining jail term in connection with the 1993 Mumbai blasts.

Dutt was released from jail on furlough for 14 days on October 1.

Later, he sought an extension which was granted to him for another fortnight.

It is learnt that the 53-year-old actor had to undergo treatment of blood clots formed in his legs due to some ailment.

He left his house in suburban Bandra early morning at around 6.30 am with wife Maanyata for Pune.

Dutt said he still had pain in his legs and appealed to fans to wish for his early release.

He also thanked the media for accepting his request to allow him privacy with his family during his parole period.

"I still have a problem in my legs but it is a bit better than before. Pray for me so that I can come out soon. Happy Diwali to all," he said.

Dutt is serving the remaining 42-month jail term for possessing illegal firearms, part of the cache of weapons which were supposed to be used during the 1993 bombings.

He had surrendered before a special TADA court in Mumbai in May and was later shifted to Yerawada jail to serve the remainder of his term.

Source: PTI© Copyright 2020 PTI. All rights reserved. Republication or redistribution of PTI content, including by framing or similar means, is expressly prohibited without the prior written consent.
Related News: TADA, Yerawada, Dutt, Bandra, Maanyata
SHARE THIS STORY
Print this article