The police claims about Jaish-e-Mohammad chief Sajad Afghani's death in Srinagar last week raised many an eyebrow with people arguing as to how a terrorist commander could be killed twice!

According to the police records, Sajad Afghani, the Harkat-ul-Ansar chief, was killed while attempting a jailbreak in Kotbalwal jail of Jammu on July 15, 1999.

In Kotbalwal jail, Afghani had shared space with other terrorist commanders, including Maulana Azhar Masood, who was released in later that year in December in exchange for passengers and crew of the hijacked Indian Airlines flight IC 814.

Afghani sustained a fatal bullet injury in the head during the foiled jailbreak attempt.

What has puzzled many is that nearly 12 years later, the same terrorist commander has been reportedly killed in an encounter.

The authorities, however, find no coincidence.

"These are just aliases given to terrorists operating in Jammu and Kashmir by their outfits. Abu Talha, Abu Owias, Sajad Afghani etc

are the code names given to the terrorists by their outfits. The actual names of these terrorists are, in fact, never known," a senior police officer said.

"It is often intended to hide their original names and to set the security forces on false scent," a senior state intelligence officer in Srinagar said.

In the over 20-year turmoil in Jammu and Kashmir, dozens of such incidents have occurred where terrorists using common code names and aliases have been killed in gunfights with the security forces.

"The code names and aliases are more common among foreign nationals fighting against the security forces in Jammu and Kashmir," the officer confirmed.

In a lighter vein, another senior intelligence officer said, "A terrorist by any other name would still remain the same. So we don't bother much about the commonality of such aliases. Our experience of dealing with insurgency for such a long period has taught us that such tactics is adopted by terrorist organisations to hide the real names of their operatives."
Mukhtar Ahmad in Srinagar
Related News: Sajad Afghani, Jammu, Maulana Azhar Masood, Kashmir, Abu Talha
SHARE THIS STORY
Print this article
Jaish-e-Mohammad terrorist gunned down in Srinagar 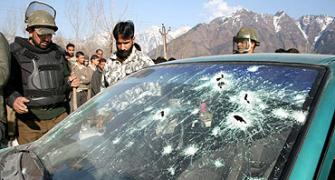