Dr Sambhu N Banik, commissioner, Human Rights Commission of Maryland, has been appointed a public member of the United States Agency for International Development's Foreign Service Performance and Evaluation Board for 2010.

The 11-member Board -- of which Banik is the only Indian American -- is tasked with reviewing and evaluating foreign service officers at USAID and recommending them for promotion based on past performance.

Banik, professor of psychology and counseling at Bowie State University, also serves on the President's Committee for People with Intellectual Disabilities. He was appointed by President George W Bush and his term runs through next year.

Banik, who has served as a public member of the State Department's Performance and Evaluation Board specifically dealing with career diplomats, told India Abroad, "I feel honored and privileged to be asked to serve again as a public member, this time evaluating USAID workers. And I believe because of my experience and qualitative services in the past that I have been invited again to serve."

He explained: "There is no doubt that is this is a tremendous responsibility because one has to be totally impartial and unbiased with one's assessments and conclusions because people's career enhancements are dependent on these recommendations  similar to granting tenure to university professors."

Banik, a longtime community activist, said, "My experience in teaching for over 30 years at Bowie State University and my involvement with the Union Institute and Bowie State in supervising doctoral students has helped me a lot in reviewing and evaluating these public servants. I have been using grading systems for over three decades and this experience has come in very handy in helping me to make as accurate decisions as I possibly can as to who should be promoted to high levels of responsibility."

He said serving on these boards "has certainly been an eye-opening experience as to how much of a sacrifice these foreign service workers make to promote America's interests and also help in developing various sectors in different countries, particularly developing and underdeveloped countries in areas such as agriculture, sanitation, health, flood and earthquake relief, the economy, promotion of democracy, etc."

Noting that many times these workers work in areas and environments that endanger their lives, he said, "I've developed such great respect and admiration for these highly motivated and dedicated individuals who serve in over 100 countries worldwide as USAID workers. When I read their files I feel as if they all need to be promoted for the quality of service they provide for the betterment of peoples, particularly those living in extremely hostile and dangerous environments around the world."
Banik is currently a member of the board of directors of the Public Members Association of Foreign Service-USA, and served as its vice president of this association for four years.

He said the main criterion the members of the board use "is work objectives, but also an individual's leadership qualities, communication and language skills, interpersonal relationships, EEO (Equal Employment Opportunity) principles, commitment to diversity, management of staff, proper utilization of resources, ability to assume higher and complex responsibility, etc."

He said he hoped that "more Indian Americans would seek to serve on these boards as it is a unique opportunity to help the interests of our adopted country in an indirect manner." 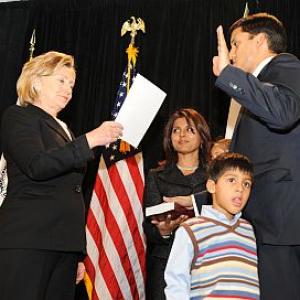