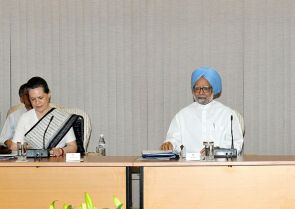 Is Prime Minister Manmohan Singh and Congress president on the same page on the demand of resignation of two ministers?

Indications are that differences have emerged between Congress President Sonia Gandhi and Prime Minister Dr Manmohan Singh over the sacking of two Union ministers known to be close to Dr Singh.

One of the minister’s Aswani Kumar, is close to PM Singh's family. United Progressive Alliance allies are upset at the double standards adopted by the prime minister when he pushed for the sacking of DMK leaders A Raja, Dayanidhi Maran and the manner in which both Raja and Kanimozhi had to spend time in jail.

A senior leader said the current episode has not only dented the image of the prime minister but also of the government and the party. The feeling in the Congress is that the position of the two ministers has become untenable. The Congress party feels that while the government and the prime minister have remained silent, the party has to defend the tainted ministers on a daily basis and it is becoming more difficult for them in the wake of the attacking questions by the media.

The Congress party is examining various options on how to resolve the logjam in Parliament in the wake of the opposition continuing to remain adamant on not allowing any bills to be passed till the two Union ministers resign and Sonia Gandhi equally adamant that the logjam should be sorted out and the Food Security Bill passed.

What is baffling is the prime minister providing unprecedented protection to Ashwini Kumar and refusing to ask the law minister to resign.

It is learnt that Sonia Gandhi has taken matters into her own hands and while she has been directing the MPs and ministers in the Lok Sabha where Congress and allies have already begun to discuss the bill, the Congress president reached out to the Leader of the Opposition Sushma Swaraj in Parliament’s central hall after the house was adjourned and while placing a hand on her shoulder, spoke to her on the need to pass the important bills.

This shows the determination of Sonia Gandhi to push the Food Security Bill.

With the Supreme Court likely to pass its orders on the Ashwini Kumar issue on Wednesday, sources say any indictment of the minister in the functioning of the CBI would lead to the sacking of the law minister. The prime minister would not be able to protect him. The prime minister, however, has made it clear to the party that he would not sack him if there are no strictures against him.

One line of thinking in the party is that after the hopeful Karnataka result celebrations on Wednesday -- with the Congress confident it will win enough seats to form the government -- the government should wipe the slate clean with the sacking of the two ministers and get on with the task of passing the bills, which the party says is crucial when it faces the elections.

A suggestion has been made to call an all-party meeting on the Food Security Bill even as Union Agriculture Minister Sharad Pawar wants a thorough discussion on the bill before it is passed. He has met leaders of both the Left and the BJP in a bid to find a solution and has also met the prime minister. Sources say while all sections of the house want the bill to be discussed before it is passed, the ruling Congress feels that if the opposition would not allow a discussion, the bill should be passed in any case.

The Food Security Bill is likely to be passed in the Lok Sabha on Wednesday say sources and after that the government would bring it before the Rajya Sabha, where again it will try and push it in the din.