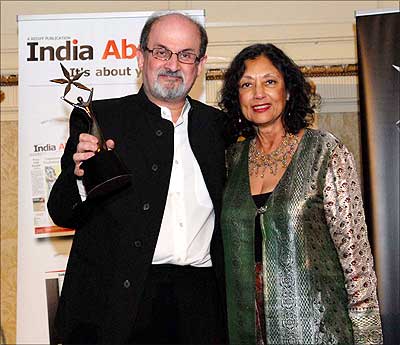 This is what the novelist told the audience at the India Abroad Person of the Year event in New York in March after accepting the first India Abroad Lifetime Achievement Award. India Abroad, the oldest Indian-American weekly, is owned by rediff.com:

A lifetime in pursuit of free speech

Just over a year ago, I was at the Vanity Fair party after the Oscars. I had the pleasure of sitting next to the great director Robert Altman, who had just won a Lifetime Achievement award. He was holding it, and I asked, 'Can I hold your Oscar?' He said, 'It's bad luck, you know. If you hold my Oscar, you'll never win one.' I said, 'Just give me the damn Oscar.' So I held his Oscar, and you see he was quite wrong, because now I have won a Lifetime Achievement Award. Thank you.

When the great philosopher Bertrand Russell was visiting China in his old age, he fell ill and had to be hospitalised. In those days, when communications weren't as good as today, the news got back to the West that he had died. As a result, everybody published his obituaries. He was able to sit in his hospital bed and read what people really thought of him. And I feel a bit the same way. Rumours of my death were much exaggerated.

Once, Gentleman magazine -- in 1984, I guess -- gave me what was called the Gentleman of the Year award, which I had to share with a billiards player called Michael Ferreira. I got up and said thank you nicely. When Ferreira got to the microphone, he said, 'You know, I am the world champion. Not the Indian champion; not the Asian champion; not the Commonwealth champion. The world champion -- of billiards. However, my sport is so insulted in this country that I have to share this award with this writer.'

If there is any billiards champion in the room, I'm sorry.

One of the things that has been amazing about the good fortune I have had as a writer is to have work that was well received in India. I always thought, when Midnight's Children came out, that if it had not been well liked by Indian readers that it was written about, all those prizes and things really wouldn't have mattered very much. The Indian reception of that book was the most important thing that ever happened to me as a writer. Of course, the great thing about the Indian reception is that it always puts you in your place.

I remember going to Delhi not long after the book came out, and talking to a group of students at Jawaharlal Nehru University. There was this girl in the front row who was unusually beautiful. So, when she put up her hand to ask a question, I, of course, said yes. She got up and she said, `Your book is a very long book. Never mind, I went through it. My question to you is -- fundamentally, what's your point?'

I said, 'Look, as you yourself say, it is a very long book. Do I have to have just one point?' And she said, 'Fundamentally, yes.' And I opened my mouth to try, and she said, 'No, I know what you're going to say. You're going to tell me the whole book from the first sentence to the end is your point.' And I said, 'Yes, as a matter of fact, something like that is what I was going to say.' She said, 'It won't do.'

Ever since, I have been trying to wonder what my point is. I don't fully have the answer, but one part of it. I remember many years later, the great Indian photographer Raghubir Singh, a friend of mine, came to see me in London after he had just spent several weeks, or even months, in England, doing a photo essay about Indians living in Britain. He had been all over the country, and he came to see me in a state of some perplexity. He said he had been to all these houses of people in the north who described themselves as Indian. But the way they lived, they had nothing like Indians. I remember saying to him that it may well be that people in India actually have to revise their sense of what it is to be an Indian. Because now there is this other Indian phenomenon, which is that there are Indians everywhere.

One of the characters in one of my books says that Indians get everywhere, like sand. It's kind of true. I think even people from India sometimes find it difficult to see the kind of metamorphosis and adaptations and changes that have happened in the Indian community as it moves across the world. And yet, that is very important to understand that that is also a way of being an Indian. For me, a very important part of my subject has become that movement across the world and what happens to people when they move. How do they change, and what do they preserve of the culture they came with, what do they learn from the culture they come to, what do they adapt, what do they dump, etc. These are profound questions that I think everybody in this room has had to ask themselves and go through.

It is a big subject because this is the age of migration. This is the age in which people have moved across the world as never before. It is now commonplace, in this city above all cities, for people to be in a place which is not the place where they began. And to have to find a way, a new way, of leading a life that really has become something I have wanted to write about.

I am writing this book just now in which one of the characters says to the other that the real tragedy of our lives as we talk about different parts of the world may not be that we are so different; the real tragedy may be how similar we are.

I think at a moment in the world's history when the subject of difference has become so vexed that it actually is worth remembering that actually, not always in a good way, we are much more like each other than we think.

For me, I had a great lesson of traveling across the world as I have done. The things we have in common, which as a writer is what you look for --- you look for humanity, you look for the stories to tell about human beings; those things are more powerful that the things that divide us, I think.

Anyway, I have to thank India Abroad for my -- what shall we call it? -- 'Oscar reaches for the stars'. Thank you very much.

Image: Salman Rushdie with novelist Bharati Mukherjee, who, along with writer Suketu Mehta, presented him the Lifetime Achievement Award at the India Abroad Person of the Year 2006 event in March. Photograph: Paresh Gandhi