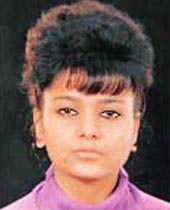 Sixteen years after molestation victim Ruchika Girhotra died after consuming poison, her friends and family members on Tuesday took out a march at Panchkula, Chandigarh, and lit a lamp outside the house where the teenager once lived.

Fourteen-year-old Ruchika, who was molested by former director general of police of Haryana S P S Rathore in 1990, consumed poison on December 28, 1993, and died the following day.

With a 'puja thali' in her hand, Ruchika's friend Aradhana accompanied by 35 wellwishers of the family took out a march from her house No 210 in Sector 6 to house No 363 in the same sector where Ruchika lived with her family then.

Accompanied by her husband Aman, who works in Australia, and her mother Madhu, Aradhana lit an earthen lamp outside the house which has changed hands a couple of times and is presently being re-built.

The marchers observed a minute's silence outside the house, which is unoccupied presently.

Aradhana said, "The signature campaign launched by me today has evoked good response from people in our struggle for justice for Ruchika and her family.

"We are also getting a large number of e-mails from residents within the country and abroad offering support to the campaign."

"After 19 years of Ruchika's molestation and her suicide three years later, the incidents have become a people's fight for justice. Ruchika's soul would have got some satisfaction. She must have smiled," she said.

Aradhana said since Ruchika's father S C Girhotra had been forced to sell his house at Panchkula, the society should take steps for the family to get the house back.

A number of students and teachers from Punjab Engineering College in Chandigarh also visited the family offering support.

Aradhana recollected the days when they played tennis. "I remember clearly we used to come to the court and play. We both would watch Monika Seles and Steffi Graff's games. Therefore, when I come here (India) it becomes very difficult for me. I can see her everywhere, her smiling face, her strokes, her body language. She was so active. I can't play this game ever again."

"She used to beat me every time. Once I tried (to play) with my husband in Australia but I couldn't. So yes, I will be living with the feelings that I shared with Ruchika for the rest of my life. It was a really ugly incident for us. It changed our outlook towards life," she said.

Manju Prakash, Aradhana's mother also remembered Ruchika, who was a daughter to her.

"She was my daughter's friend. I was like a mother to her, as her own mother had died. We used to talk. I feel very sad when I remember her. She would have had her own family today," she said.