The Jammu and Kashmir cabinet is unlikely to take any final call on the partial revocation of the controversial Armed Forces Special Powers Act as proposed by Chief Minister Omar Abdullah, top government sources told rediff.com.

The state cabinet is likely to meet for the first time in winter capital Jammu on November 17 after the annual darbar move.

The sources said, the chief minister who called on Prime Minister Manmohan Singh, Finance Minister Pranab Mukherjee and Defence Minister A K Antony in New Delhi has been 'advised to discuss and sort out the sensitive issue at the unified headquarters level since the Centre could not take a unilateral call on Omar's proposal without taking security agencies on board.'

The ruling National Conference and main opposition Peoples Democratic Party are the strong votaries for the AFSPA revocation while NC's ruling alliance partner, the Congress, has advocated further discussions on the ticklish issue.

Analysts say that since the chief minister has staked his credibility on the partial revocation of the AFSPA, he would go all out to have his way.

The unified headquarters had in its November 9 meeting discussed the issue where the army had strongly opposed any revocation of AFSPA. 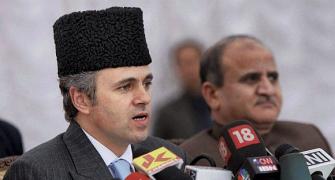