Even as Mitt Romney is yet to bag his Republican Party's nomination for the November presidential polls, the Obama campaign has recognised the former Massachusetts governor as the opponent to the incumbent US President.

"By now you've probably seen the news: The amazing -- and amazingly negative -- Republican race for president is all but over. Mitt Romney is almost certainly our opponent in this election," the Obama for America campaign manager, Jim Messina, said in an email written to President Barack Obama's support base.

"If people know the truth about Mitt Romney and President Obama, who they are, and their very different plans for this country, there's no way we can lose this thing," Messina said in her long email which accompanied the video.

Messina said Obama is fighting to ensure that the responsibility for delivering on that future is broadly shared, which means ending the budget-busting tax cuts for the wealthy that add to our deficits and crowd out the very investments we need to grow.

"Mitt Romney has a different, and frighteningly familiar, view. He thinks you grow our economy from the top down. He'd take us back to an economy based on outsourcing, risky financial schemes, and massive tax cuts for the wealthy. He'd return to the policy of allowing Wall Street, Big Oil, and other special interests to write their own rules," she said.

"Romney's positions are the most radically anti-women of any candidate in a generation: He supports banning all abortions, backed a so-called "personhood" amendment that could make certain forms of birth control illegal, and says he would 'get rid of' federal funding for Planned Parenthood that provides preventive services like cancer screenings for millions of women," she alleged.

"Romney would repeal Obamacare. Insurance companies would once again be allowed to run up premiums, unjustifiably deny coverage for pre-existing conditions, drop patients when they get sick, discriminate against women by charging them more for coverage than men, and spend more of your premium dollars on CEO profits and bonuses instead of your actual health care," she said.

According to the email, Romney is a risk when it comes to foreign policy and national security. "On many of these questions, he has shifted his position for political reasons, even within the same campaign. His only clear commitment is to endless wars: He has no plan to end the war in Afghanistan and would leave our troops there indefinitely. He called Obama's decision to bring our troops home from Iraq by last Christmas "tragic," she said.

"Romney and his special-interest allies are going to spend the next seven months trying to deny, downplay, or hide these facts from voters.It's on us to speak the truth. So print these out, post them on your fridge, and share them on Facebook. Send this list around to friends who are on the fence," Messina said.

Also the Obama for America released a new video highlighting Lilly Ledbetter's own words on the importance ensuring women have equal pay for equal work and the President's record in support of women's economic security.

"Today, when asked whether Romney supports the Lilly Ledbetter Fair Pay Restoration Act that helps women fight for equal pay, his campaign tersely replied 'we'll get back to you on that'."

Women's pay equity isn't something that someone who wants to be president should need to 'think' about, not when working women across America who on average earn just 77 cents to every dollar that men earn for the same job," the campaign said.

Source: PTI© Copyright 2021 PTI. All rights reserved. Republication or redistribution of PTI content, including by framing or similar means, is expressly prohibited without the prior written consent.
Print this article
Obama takes on Romney; launches ad campaign against him 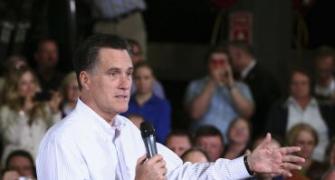 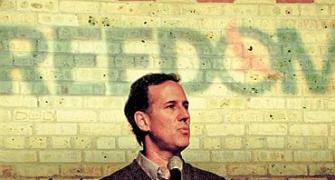