Riot after riot: UP under Akhilesh takes a dangerous turn

"The law and order issue all over UP needs national attention," says a senior journalist from a Hindi daily published from Lucknow, and he is right. Under Akhilesh Yadav, communal violence returns with a vengeance to the state, reports Sheela Bhatt

The twin towns of Ayodhya-Faizabad have witnessed communal tension since October 24. On Friday, Kotwali and Cantonment areas in Faizabad were put under curfew."The law and order issue all over Uttar Pradesh needs national attention," says a senior journalist from a Hindi daily newspaper published from Lucknow.On March 15, Akhilesh Yadav was sworn in as the chief minister of UP. Following that, in less than three months, the state saw communal tension erupting after a long time.Comparatively, then chief minister Mayawati's regime was almost riot-free. But the ground situation is changing dramatically in India's largest state.UP has 75 districts, out of which 44 districts always get declared sensitive by the Election Commission during elections. Out of those, 10 are 'communally sensitive'. They are Allahabad, Kaushambi, Mau, Basti, Sant Kabir Nagar, Faizabad, Deoria, Gorakhpur, Moradabad, Muzaffarnagar or Prabuddh Nagar. This suggests that the communal tension in UP cannot be allowed to fester.On June 1, tension erupted in Kosikalan village, which is about 40 kilometres from Mathura.The story from the two warring sides differs, as it is always the case in such incidents. Agency reports said tension rose when a group of Muslims praying in a mosque were offended by a youth who was allegedly urinating in the water pond kept for namazis.Reportedly, they beat him up and asked him to leave the place. The youth left the mosque, only to return with a few supporters to argue out his case. In no time, a riot broke out and quickly spread to the surrounding area, killing four people.More than a dozen shops were looted and houses were burnt. Only when the chief minister intervened and pulled up the local administration, could the situation be controlled.On June 23, Ashtan village of Pratapgadh district witnessed violence on a large scale. Many houses belonging to Muslims were burnt when news spread that a Dalit girl had been raped and killed by members of the minority community. The local administration intervened and promised that legal action would be taken and the culprits would be arrested, but during the funeral procession villagers went berserk disregarding the promises given to the local police.There are reports that some rioters used LPG cylinders and many of them opposed the entry of the police force in the areas where riots had taken place. People even indulged in stone-pelting when the police tried to take position in residential colonies.Pratapgadh is the home district of notorious criminal-turned-politician-turned-minister 'Raja Bhaiyya.' Some 40 Muslims' houses were burnt down in Ashtan.More riots followed in July. According to a report in The Times of India, 'Trouble began when a group of Kanwariyas from Brahmapura were returning from Kachchla with Ganga Jal (water from the Ganga) in earthen pots. Playing devotional music on an amplifier system installed on one of the hand-pulled carts, the group reached the Shahabad locality, when some locals objected to the devotional music being played on the sound system on grounds that Ramzan prayers were being offered nearby.'The report further said, 'The two sides were still talking it out when some mischief-mongers allegedly smashed some of the earthen pots containing Ganga Jal, leaving the Kanwariyas infuriated leading to exchange of blows. This led to heavy brick-batting, which continued till the police reached the site with PAC back-up and chased away the mischief mongers.'The riots spread to other areas, too. One person was killed on the first day, and the area remained tense for the next 10 daysSimilar is the story of Masuri village near Ghaziabad, where  the situation got out of hand over a small issue, and Muslims gheraoed the police station. The nervous police shot dead six Muslim youth. Similarly, on August 17, more riots started in Kanpur and Lucknow over the violence in Assam.On October 24 in Faizabad, the violence started because of an incident of eve-teasing during a Dussehra procession. A crowd carrying a Durga idol was headed towards the Saryu river for immersion. Some fringe elements tried to communalise the atmosphere, but the police showed presence of mind and brought the situation under control.Hashim Ansari, 91, the oldest surviving plaintiff in the Ram Janambhoomi-Babri Masjid case, has blamed the Rashtriya Swayamsevak Sangh, the Vishwa Hindu Parishad and the Bharatiya Janata Party for communalising the situation."The saffron brigade is preparing to communalise the atmosphere before the 20th anniversary of the demolition of the Babri Masjid which was razed by them on December 6, 1992," Ansari said while talking to the media.

But with equal passion BJP leader Lalji Tandon denies the charges. Today, Tandon was in Ayodhya-Faizabad and he accused the Samjwadi Party of  indulging in the appeasement of Muslims. "Such a situation was not there even during 1992. The SP government is doing these things for vote-bank politics," Tandon alleged.The BJP thinks the Samajwadi Party is appeasing the Muslims so that their votes will not be divided amongst many secular parties in tne next election.The political signals from Lucknow are extremely disturbing. 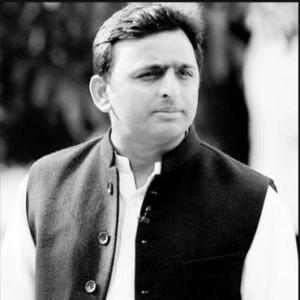 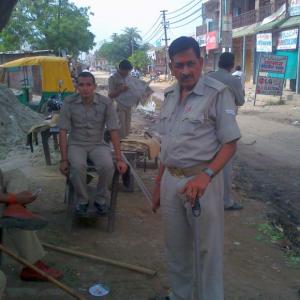