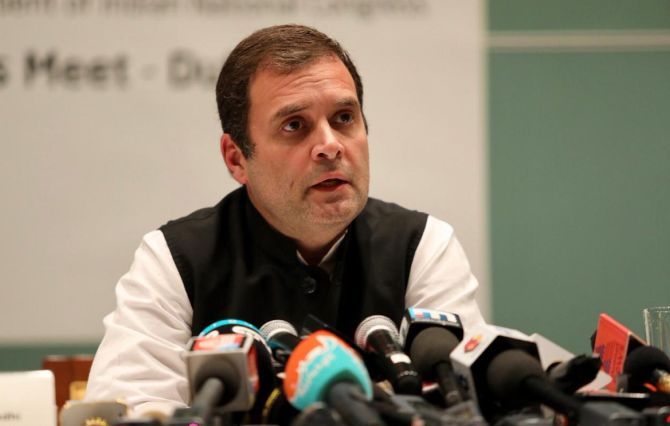 Hours after the Samajwadi Party and Bahujan Samaj Party announced their alliance without the Congress in Uttar Pradesh for the 2019 Lok Sabha polls, Congress president Rahul Gandhi on Saturday said his party will fight the elections in the state with full force.

Addressing a press conference in Dubai, Gandhi said he has 'tremendous respect' for the leaders of the two parties and 'they have a right to do what they want to do'.

"The BSP and SP have every right to have an alliance. I think the Congress party has tremendous amount to offer to the people of Uttar Pradesh so we will do our best as the Congress party and we will fight with full capacity to spread our ideology."

"The BSP and the SP have made a political decision. It's on us on how to strengthen the Congress party in Uttar Pradesh and we will fight with our full capacity," he said.

He said the Congress party might give a surprise or two in the Lok Sabha elections in Uttar Pradesh 'about what the party is capable of doing and to mobilise people'.

Rejecting suggestions that not being part of the SP-BSP alliance was a setback for the Congress, he said, "I won't be disappointed about the BSP-SP alliance as long as the BJP does not come to power."

"They have said some wrong things about the Congress, but we accept it. Because that's how we work."

Gandhi said it does not matter if his party fights separately or together with the SP and BSP, because the end result would be the same -- 'the BJP won't get their seats'.

Once arch-rivals Samajwadi Party and Bahujan Samaj Party announced Saturday their tie-up in Uttar Pradesh for the 2019 Lok Sabha polls, sharing 38 seats each and keeping the Congress out of the alliance.

Asked about his 'misogynist' remarks about Defence Minister Nirmala Sitharaman on which the National Commission for Women has issued a notice to him, Gandhi said, "Prime Minister Narendra Modi has helped Anil Ambani steal Rs 30,000 crore and the House of the people Lok Sabha is where he should have defended himself but he chose to send another person and that person happened to be a woman.

"I would have made a very similar comment if it had been a man. Do not impose your sexism on me. I am very clear that the prime minister should have delivered that defence but he did not have the guts."

He said the Congress has not yet got the answer whether Defence Ministry officials objected to the prime minister 'bypassing' the Rafale deal.

Sitharaman had spoken on behalf of the Prime Minister and defended the Rafale deal in the Lok Sabha, countering questions raised by Congress and other opposition parties.

Attacking the Modi government on rising intolerance, Gandhi said like the United Arab Emirates, which had declared 2019 as the 'Year of Tolerance', India also believes and celebrates tolerance but 'there is a little bit of aberration going on in India where BJP is being very aggressive, intolerant and attacking and destroying our institutions'.

He said it is a 'temporary blip' which will be 'taken care of' after the 2019 elections.

He alleged that every single institution in the country has been 'destroyed by the government and the idea of the BJP and the RSS is that there should only be one institution in India that is RSS'.

He said the Modi government is 'attacking the strength of India by strangling our institutions'.

"We will start to do what Congress party has successfully done; put India on a economic path," he said.

"The government is failing and we have a massive unemployment crisis. Demonetisation by Prime Minister Modi was a rash and irresponsible action. He was directly responsible for the decimation of informal sector."

He said bringing businesses to India is fundamentally connected to the environment of the country.

"India is facing a 14-year low with regard to investments flow in India. The central reason is a couple of ill-advised economic policies like demonetisation and and poorly designed GST and also the atmosphere that is being vitiated. India is known for non violence and its peace loving nature when people look at India and see violence they they get worried. We will put an end to the anger that has been spread by the BJP," he said.

"We will rebuild trust in our institutions like Reserve Bank of India, Election Commission of India, Supreme Court which are under systematic attack by the Modi govt," he said.

He said if the Congress will come to power it will take some rational economic decisions and restructure the GST.

Asked about Pakistan Prime Minister Imran Khan's overtures to start bilateral talks, Gandhi said, " I am all for peaceful relationship with Pakistan, but, I will absolutely not tolerate violence being carried out on innocent Indians by the Pakistani State."

"You cannot carry out acts of terror in India and expect India to talk kindly to you," he said.

He said it is a 'tragedy and shame' that the Prime Minister Modi has not delivered the commitment to the people of the state.