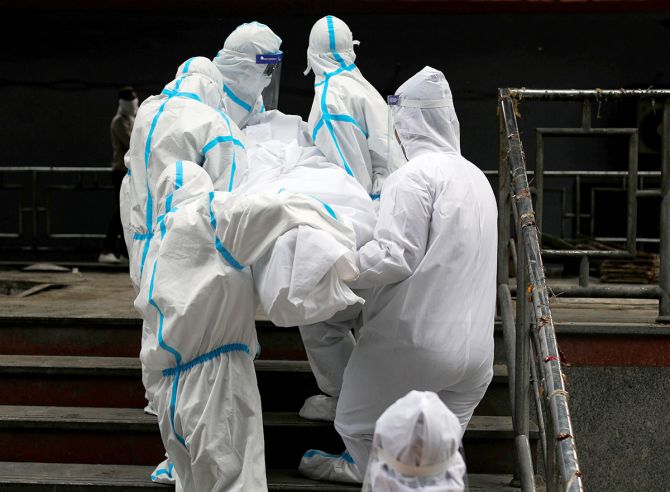 IMAGE: Health workers wearing personal protective equipment carry the body of a man, who died due to the coronavirus disease, at a crematorium in New Delhi. Photograph: Adnan Abidi/Reuters

During the same period, the number of recoveries surged to 33,23,950 pushing the recovery rate to 77.65 per cent, according to the data updated at 8 am on Tuesday.

The COVID-19 case fatality rate stands at 1.7 per cent.

According to the data, there are 8,83,697 active cases of coronavirus infection in the country which comprise 20.65 per cent of the total caseload. India's tally of coronavirus infection crossed the 20-lakh mark on August 7, reached 30 lakh on August 23 and went past 40 lakh on September 5.

According to the Indian Council of Medical Research, the number of tests conducted for detection of COVID-19 in India has reached 5,06,50,128 with 10,98,621 samples being tested on Monday.

Of the fresh deaths, 423 were reported from Maharashtra, 141 from Karnataka, 89 from Tamil Nadu, 70 from Andhra Pradesh, 61 from Punjab, 58 from West Bengal, 56 from Uttar Pradesh, 32 from Delhi, 23 from Haryana, 17 each from Madhya Pradesh and Jammu and Kashmir, 15 each from Chhattisgarh and Gujarat, 14 from Rajasthan and 13 from Jharkhand.

Twelve fatalities were reported from Kerala, 11 each from Bihar, Puducherry and Telangana, 10 each from Assam and Odisha, nine from Goa, seven from Uttarakhand, three each from Chandigarh and Tripura, while Himachal Pradesh and Meghalaya have registered one fatality each. IMAGE: A health worker in personal protective equipment collects a swab sample from a woman during a rapid antigen testing campaign for the coronavirus disease in Mumbai. Photograph: Francis Mascarenhas/Reuters 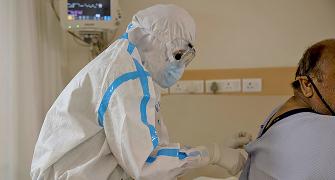