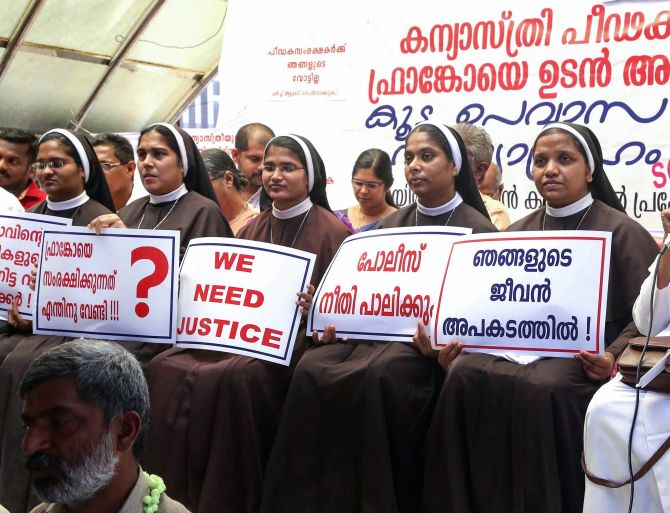 Weeks after accusing a Roman Catholic Bishop of raping her, a nun has sought urgent intervention of the Vatican for justice and demanded his removal as the head of the Jalandhar diocese, questioning why the Church was 'closing its eyes to the truth' when she mustered courage to make public her sufferings.

In a scathing letter to the Vatican that was made available to the media on Tuesday, the nun also asked will the Church be able to give back what she has lost. She alleged that Bishop Franco Mulakkal was using 'political and money power' to bury the case against him.

Noting that she felt the Catholic Church was still doubting her over the argument as to why she allowed the bishop to sexually abuse her multiple times, the nun said she had tremendous fear and shame to bring this out into the open. She also feared 'threats' her family members.

Bishop Mulakkal on his part rejected the charges against him as 'baseless and concocted' and said he was open for a probe. The bishop also accused the nun of 'blackmailing' him.

With the protest by various Catholic Reform organisations in Kochi seeking justice for the nun entering the fourth day, the Kerala government said 'justice will be done' amid reports that Cardinal Gracias, the President of Catholic Bishops Conference of India, will be raising the alleged rape of the nun with the Holy Pope.

As the nun shot off the lengthy letter to Giambattista Diquattro, the Vatican representative in India, the 'Missionaries of Jesus', a congregation to which she belongs, came out against her and five other nuns, who are staging a protest seeking justice, accusing them of 'spreading blatant lies' against the Bishop.

But the protesting nuns rejected the charge and said they will continue their agitation till justice was delivered.

In her lengthy letter, the nun also sought to explain her silence before coming out against the bishop and said she had 'tremendous fear and shame' and wondered why the church was 'closing its eyes to the truth'.

Senior Kerala minister E P Jayarajan rejected allegations of attempts to sabotage the case and asserted that the probe was proceeding in the 'right direction'.

"A very strong investigation is being carried out in the case. It is proceeding in the right direction. No accused would be allowed to escape the clutches of the law," he told reporters in Kannur.

The minister also said there was no pressure on the government in acting against the bishop.

In her letter dated September 8, the nun, who has accused the bishop of rape and having unnatural sex with her multiple times between 2014 and 2016, said she has turned to the Church authorities for justice.

She demanded removal of the Jalandhar Bishop from the post, alleging that by continuing in the position, Franco and his close associates 'are using the wealth of the diocese to divert' the course of the police investigation.

'Seeking your urgent intervention in this case as the representative of the Holy See in India,' the nun said. 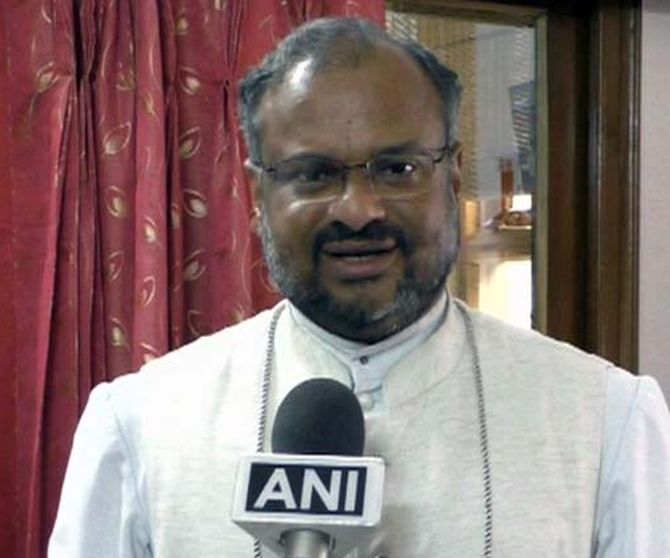 She also alleged that the Bishop and his associates were luring people to take a stand supportive of them by assuring them properties and other forms of wealth.

'They are arranging people to attack us and Bishop Franco is using his political power and money to get higher authorities of the investigation and the government to bury legal proceedings that I have filed against him,' she charged.

Noting she had filed the complaint against the bishop two months ago, the nun claimed even though the Special Investigation Team probing it was convinced of the proofs, they were not able to arrest him because of his political and economic power.

'I beg the Church authorities to kindly make a speedy enquiry about this case and remove Bishop Franco from his responsibilities as the spiritual leader of the diocese,' the nun said.

The nun wondered why the Church was closing its eyes to the 'truth when I have mustered courage....'

'Your highness, I would like to ask: Will the Church authority -who stand to protect Bishop Franco and safeguard the dignity of the Church by hiding his wickedness- be able to give back what I have lost?' she asked in the letter.

Copies of the letter were sent to 21 others, including Cardinal Oswald Gracias and Delhi Metropolitan Archbishop, Anil Couto.

In a statement, the Missionaries of Jesus congregation questioned the character of the nun and alleged she had illicit relationship with one of her relatives. It said bringing the real truth in the case was their 'moral and divine' responsibility.

The agitation by the nuns was part of an agenda to destroy the Church and the congregation, it charged.

"If I am found guilty, which I am not, I am likely to be punished...I will appear before police if I am summoned. I am a law abiding citizen," the Bishop told television channels in Jalandhar.

The Kerala priest said he like everybody else had the right to take legal recourse.

Terming the allegations against him as 'serious', the bishop said only three persons knew the truth.

"The complainant's sister, myself and God (know the truth)," he said.

The priest also hit out at those protesting against him.

"At this moment, whatever is going on is not justifiable. I suffered it silently. This is a time of crisis...I am going through painful agony...I tell everyone to pray to God...let the truth prevail," he said. 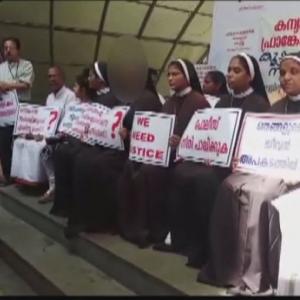