Under attack for his rape remarks, Congress leader Rahul Gandhi on Friday said he will never apologise, and instead demanded an apology from Narendra Modi, claiming that the Prime Minister had called Delhi a "rape capital" under the United Progressive Alliance government. 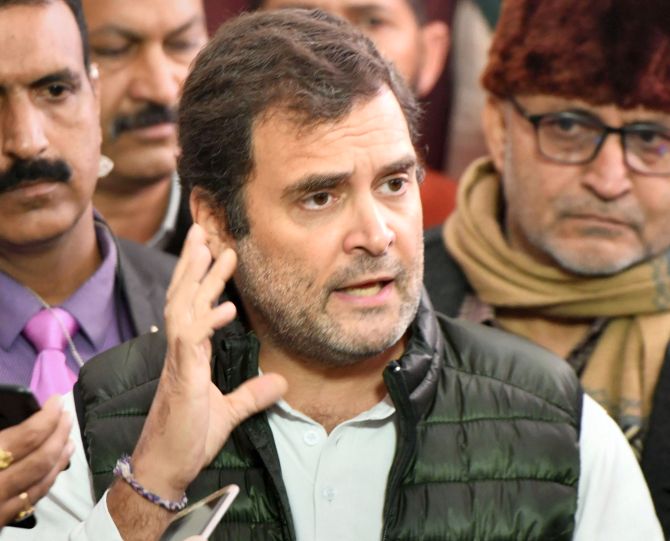 "As far as their (BJP's) demand for apologising (is concerned), I am never going to apologise to them," he told reporters outside Parliament.

Gandhi also clarified his rape statement that triggered protests by the Bharatiya Janata Party in both houses of Parliament, saying he has simply made a point that Modi has been talking about 'Made in India' but it has now become 'rape in India' as incidents of rapes are being reported in newspapers across the country.

He said the main issue today is that "the BJP, Narendra Modi and Amit Shah have burnt the entire North East and this is a tactic used to divert attention" by raising his rape remarks.

Gandhi said he has a video clip of Narendra Modi in his phone in which he terms Delhi as the 'rape capital' and he will put the clip on Twitter for the whole country to see.

"Modi should apologise. For burning the North East. For destroying India's economy. For this speech, a clip of which I'm attaching," Gandhi later tweeted.

Talking to reporters, Gandhi said "Narendra Modi should also reply not just about the violence on women, but also about why he destroyed the country's economy and he should also answer on why he snatched away jobs of the youth of the country."

Gandhi also clarified his remarks made in Jharkhand on Thursday.

"I had said that Narendra Modi had talked about 'Make in India' and we thought we would see 'Make in India' in all the newspapers. But, when we read newspapers we only see 'Rape in India' everywhere. There is no BJP-ruled state where rapes are not happening against women. In Unnao, a BJP MLA committed rape against a woman, and also got an accident done of the victim's car, but Narendra Modi did not utter a single word and neither took any action," the Congress leader alleged.

WATCH: To divert the attention from North East, the BJP is raising my statement, says Rahul

Gandhi said India's biggest strength was its economy and today Raghuram Rajan (former RBI governor) during a meeting told him that no one talks about India or Indian economy any longer in the US or Europe.

"And, when India is talked about it is about atrocities, division and violence. They have ruined the entire reputation of our country and this is what I talked about in my speech yesterday," he said.

Gandhi faced a strong attack from the BJP over his 'rape in India' remarks made during a poll rally in Jharkhand and demanded an apology.

The BJP raised the issue in both houses of Parliament and stalled proceedings on the last day of the winter session of Parliament, with Union minister Rajnath Singh stating that leaders like him have no "moral right" to be in Parliament.

The BJP protest, led by the party's woman MP who assembled together just near the Well to attack Gandhi, consumed the scheduled business of Lok Sabha and forced Speaker Om Birla to adjourn the proceedings twice.

Later the Speaker adjourned the House sine die, and the protests continued as he read out the list of business taken up by the House during the winter session.

Amid the din in the House, Dravida Munnetra Kazhagam's Kanimozhi defended Gandhi as Congress members also came out of their seats in protest and asked the speaker to take up the Question Hour.

She said Gandhi did not make the remarks in the House and that he was referring to cases of sexual assaults and violence against women in the country.

Speaking at a public meeting in Jharkhand, where assembly elections are underway, Gandhi had said on Thursday that Prime Minister Narendra Modi had promised 'Make in India' but "wherever you see now you find 'rape in India'" in different parts of the country.

The saffron party seized on his "rape in India" barb to corner his party.

The protests began as soon as the House assembled. After the House paid tributes to those who had lost their lives in the 2001 Parliament attack on this day, Minister of State for Parliamentary Affairs Arjun Ram Meghwal said several BJP members had given notices of adjournment against Gandhi's remarks and they should be allowed to speak. 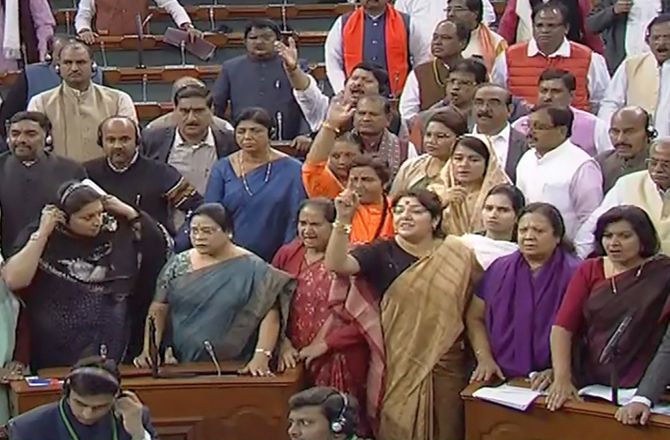 Tearing into the Congress leader, Union minister Smriti Irani said he had "insulted" the women and men of India and claimed his remarks amounted to inviting people to rape women.

Seeking his apology, Irani said he should be punished.

Joining the issue, Defence Minister Rajnath Singh attacked Gandhi and said such MPs don't have moral right to be a member of the House.

Gandhi has hurt not only the House but the entire country, he said.

Singh said the Modi government had started 'Make in India' programme to transform India from an importing nation into an exporting one.

It is aimed at providing employment to youth in the country but people are now rhyming it with remarks which cannot be uttered, Singh said.

"Such members have no moral right to be a member of Lok Sabha," the senior BJP leader said, demanding apology from Gandhi.

The Congress leader should apologise to the entire nation, he said.

He recalled that BJP members Ananth Hegde and Sadhavi Nirajan Jyoti had expressed regret in the House for remarks made outside. Both were then ministers. Jyoti is a minister in the present dispensation as well.

BJP MP Locket Chatterjee said Gandhi had insulted not only women of the country but everyone. All men are not rapists, she said.

Irani also said Gandhi referred to rape cases to make mockery of his political rivals which is condemnable.

She said Kanimozhi's defence of Gandhi was "disgusting to to say the least".

Earlier in the morning, as the ruckus continued for around half-an-hour, the speaker adjourned the proceedings till noon. Question Hour could not be taken up.

More than 30 members from the BJP, including Bhopal MP Pragya Thakur, were seen standing in the aisle and shouting slogans.

Congress members, too, were in the aisle. 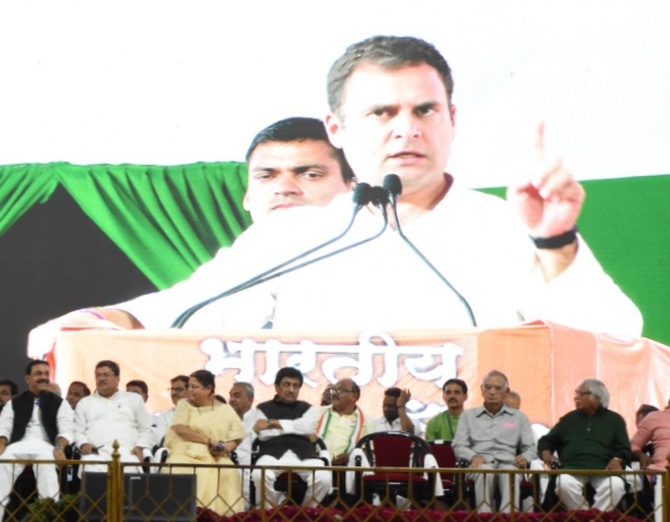