Nirupama Rao, India's new ambassador to the United States, has defended India's stand on Libya and Syria, which stands in stark contrast to that of the US and its allies in the North Atlantic Treaty Organisation.

In the interaction that followed her keynote address at the third Brookings-FICCI Strategic Dialogue on US-India Relations, Rao said, "Let me say that we deeply value the consultations that we had with the United States on issues related to the Arab Spring and the upheavals that we have seen in the Middle East and North Africa."

Rao argued, "In India and the region that we come from, our views are very much impacted by the fact that we have large communities of Indians who live in this region --who work in this region and they are Indians of all economic levels."

"They are not necessarily white-collar professionals. They are people who work in oil rigs, in factories or in the construction industry and the livelihood issues of these people is very important in terms of the working of their families in India," she said.

Rao explained that this "consideration has always been close to our hearts and uppermost when we look at these issues apart from the energy security aspect and our huge dependence on energy sourcing from this region."

Referring to India's non-vote on the UN Libya no-fly Zone resolution, she said, "When the Security Council discussed and resolved to adopt a certain mode of action on this issue, our primary consideration was that there was insufficient information at that time about the nature of what was happening -- about the rebellion itself and the influence and the strength of the rebel forces."

Rao also said India at the time also had to attend to the evacuation of about 20,000 Indians from across Libya.

But rationalising New Delhi's reluctance to endorse the US and NATO action, she noted what Prime Minister Manmohan Singh had said in his UN General Assembly Address on September 24 about the unrest in Middle East and North Africa.

"Solutions are best endangered from within and they have to come out from within these countries, and for us to seek, to prescribe or to impose solutions from outside, however well meaning those efforts, may not succeed in realising the best possible results".

"That has been our worry and that has been our concern about Syria also," Rao said, adding quickly, "We are against violence against civilians by the governments and the organisations of the state, but we have to do our best to ensure that a Libya-like situation doesn't emerge there."

She said, "Even if you look at the other countries where there has been unrest and things have quietened, we haven't seen a culmination of the realisation of a situation where we can say, once and for all, that the best has been realised and the change, once it has settled down, has resulted in an order that spells the best for the future of these countries."

Rao asserted, "We would very much like to see that and we are for democracies, we are for human rights, but we are also for the rule of law and we would like stability to the maximum extent possible."

"We also hope we can look together at the profound changes sweeping across the Middle East, and see our common stake in successful transitions in a part of the world that matters enormously to both of us," he said.

Burns declared, "We applaud India's offer to send election experts to Egypt, and hope India can expand its support for the new Libya, and stand with the Syrian people as they peacefully demand their universal rights."

Burns acknowledged, "While no country should seek to impose its own political system on others, India remains a stirring example of a successful, multi-party democracy that offers hope to societies wrecked by political turmoil and sectarian or tribal divides. We hope India will recognise the value of helping others match that achievement."

At the end of Rao's defence of India's policy on Libya and Syria, Burns said, "It is going to be important for us to build up that habit of conversation."

"It doesn't mean we are going to see everything identically, but I think the two of us -- the United States and India -- do have a deepening stake in the success of these transitions. And the two of us can do things that can contribute to that success," he said. 'Our houses were torched, we went without food in Libya'
India's Libya no-vote based on misinformation: US
US outlines the road ahead for nuke deal with India 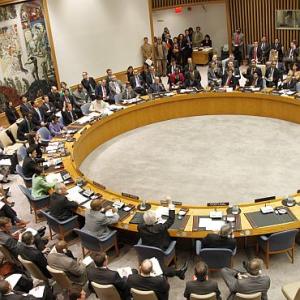