News
Business
Movies
Sports
Cricket
Get Ahead
Money Tips
Shopping
Sign in  |  Create a Rediffmail account
Rediff.com  » News » Rampal arrested from his ashram, to be produced in court on Thursday

Self-styled 'godman' Rampal was on Wednesday arrested from his ashram, ending an over two-week tense standoff between his supporters and the police after close to 15,000 of his followers were evacuated from the sprawling premises. An ambulance believed to be carrying self-proclaimed 'godman' Rampal (inset) from his ashram after his arrest in Hisar. Photograph: PTI/TV grab

The controversial 63-year-old baba will produced in a Hisar court on Thursday, Superintendent of Police, Panipat Satish Balan told reporters.

The police arrested Rampal from Satlok ashram where four women died mysteriously and two others in hospital in the midst of a showdown. The arrest came in the night after over 15,000 followers including women, children and the aged, who were being forcibly kept inside the 12-acre ashram as a human shield to Rampal, were evacuated. The security personnel had halted the operation on Tuesday evening to enable the followers to come out. Some followers of Rampal were still stated to be inside the ashram which had been well fortified by the self-proclaimed 'godman'. Locals of Barwala and surrounding areas took to the streets following his arrest.

The police said Rampal was arrested around 9:20 pm and whisked him away in an ambulance. The media, present in large numbers, was asked to clear the way for the ambulances to enter the ashram, the police said. On a day of high drama, Rampal stuck to his defiant stand of not surrendering despite repeated announcements by the police asking him to do so. Simultaneously, many followers including women with children stuck inside trooped out, many of them complaining that they were forcibly kept inside the ashram with its gates kept locked. The Haryana police slapped fresh cases, including the serious charge of sedition, against Rampal who will be produced in the Punjab and Haryana high court on Friday, the deadline set by the court. Police personnel look on as Rampal is taken away in an ambulance. Photograph: TV grab

The police said 70 supporters of the Rampal, most of them his 'private commandos', who indulged in violence on Tuesday, were arrested and produced before the local court which sent them to judicial custody until December 3. Those arrested, include son of Rampal and chief volunteer Purushottam Dass, a cousin of the 'godman'. Unlike Tuesday, when the vicinity of the ashram in this town of Hisar district looked like a war-zone when police and Rampal's supporters clashed, including small arm firing from inside, the situation was peaceful on Wednesday.

More than 10,000 followers, including aged men and women and children, who had been holed up inside the ashram for days, came out with raised hands, signalling peace. The desertion continued until late in the night. By late evening, a large posse of CRPF personnel were brought to the periphery of the ashram. The Centre had also despatched 500 CRPF personnel to help the operations. Earlier, the Centre appeared to be unhappy over the way the issue was being handled. Union Minister Rajnath Singh is understood to have told Haryana Chief Minister M L Khattar to end the standoff quickly.

"The state government is proceeding carefully and cautiously to arrest Rampal," Khattar said later. While the clashes yesterday left over 200 injured, the police on Wednesday announced that bodies of four women were handed over to them by the ashram staff. Another woman and a one-and-a-half year old baby were taken in serious condition to a hospital where they died. It was not clear what caused their death. State police chief S N Vashisht said there were no external injuries and only a post-mortem will reveal the real reason of death.

Earlier in the evening protesters from this town, located on the Hissar Ambala Highway, who were marching towards the ashram, were stopped by the security personnel. Unidentified persons set on fire some vehicles in Banbori village, which had been brought there by the police on Tuesday after towing them away from near the ashram complex. 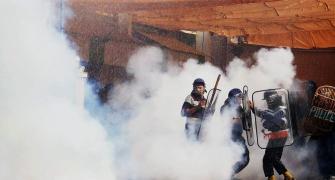 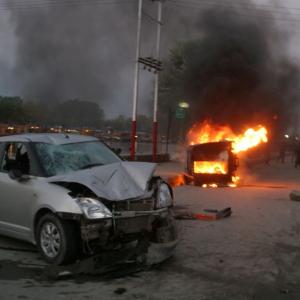 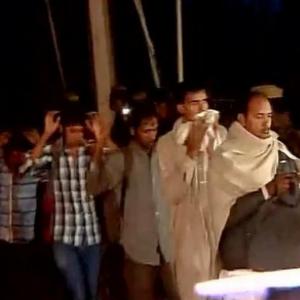