In an embarrassment to the Bharatiya Janata Party which has spearheaded the Ram Temple movement and Hindutva agenda, the party's Rajya Sabha member Ram Jethmalani on Thursday termed Ram, the protagonist of Ramayana, as a 'bad husband'.

Speaking at a function to launch a book on a man-woman relationship, Jethmalani said "Ram was a bad husband. I don't like him at all. Just because some fisherman said  something, he sent that poor woman (Sita) to exile."

He went on to take a jibe at Lakshman by saying he was 'even worse'. He said, "When Sita was abducted, Ram asked him to go and find her as she was abducted during his watch.

Lakshman simply excused himself saying she was his sister-in-law and he never looked at her face, so he wouldn't be able to identify her", Jethmalani said.

Earlier, Jethmalani spoke against use of religion and said, "Today we are at the crossroads of the very fate of this planet. Religion has totally changed. Religion has produced terror. Religion has produced those who issue fatwas of murder..."
PTI
Source: PTI© Copyright 2021 PTI. All rights reserved. Republication or redistribution of PTI content, including by framing or similar means, is expressly prohibited without the prior written consent.
Related News: Ram Jethmalani, Bharatiya Janata Party, Ram Temple, Rajya Sabha, Hindutva
SHARE THIS STORY
Print this article
WB: Pranab's son Cong candidate in Lok Sabha by-poll 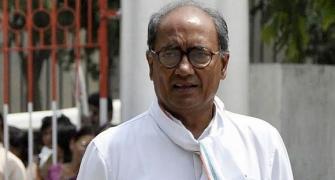 Define HINDUTVA: Digvijaya challenges RSS
Party has given me much more than PM's post: Advani

Won't resign from party, will carry on fight: Jethmalani

Vaishnodevi-like temple to come up on Swiss Alps