On August 17, the Rajya Sabha for the first time will take up a case of impeachment of a sitting judge of the Calcutta high court, Justice Soumitra Sen. An impeachment motion will be moved by Communist party of India (Marxist) leader Sitaram Yechury.

In the history of independent India, this is only the second time that impeachment proceedings will be initiated in Parliament; the first time was in 1993 when P V Narasimha Rao was the prime minister. Justice Ramaswamy was to be impeached in the Lok Sabha but the motion could not be carried through as Congress party members abstained from voting.

Congress leader Kapil Sibal was Ramaswamy's lawyer and put up a sterling performance in the House, which had been converted into a courtroom. Soon after the motion fell through, the judge resigned, ending the controversial chapter. Interestingly, the motion was moved by a CPI(M) MP Somnath Chatterjee in the case of Justice Ramaswamy.

This time around the motion has been moved in the Rajya Sabha. As of now Congress MPs are backing the impeachment motion and if Justice Sen does not resign, the motion would then come up in the Lok Sabha on August 25-26 after which it would be sent to the President for her signature.

The constitution says that for the impeachment motion to be carried out, it has to be passed by both houses of Parliament in the same session. The judge or his counsel would be given one-and-a-half hours to plead his case and make his points after which the issue would be discussed in the Rajya Sabha for four hours. The matter is likely to be carried on to the next day.

Former Chief Justice of India, K G Balakrishnan, had raised this issue with the prime minister detailing the points against Justice Sen, on the basis of which the Parliament would go ahead with his impeachment motion.

Most MPs privately say that Justice Sen's case is a matter of only a small amount, which he paid back later, while a large number of scandals take place with amounts running into several crores of rupees.

But sources in the government say that political parties might like to take this opportunity to send a strong message to the judiciary. It is being called as legislative activism in response to judicial activism, which has put the government on the firing line on a number of occasions.

I write this to recommend that the proceedings contemplated by Article 217(1) read with Article 124(4) of the Constitution be initiated for removal of Mr. Justice Soumitra Sen, Judge, Calcutta High Court.

2. Mr. Justice Soumitra Sen was a practising advocate of Calcutta High Court before he was appointed as a Judge of that High Court, with effect from December 3, 2003. In Civil Suit No. 8 of 1983, filed by Steel Authority of India Limited against Shipping Corporation of India Limited and Ors., Calcutta High Court vide order dated April 30, 1984 appointed him as a Receiver to make an inventory of certain goods which had been imported and then rejected by Steel Authority of India Limited and to sell those goods and hold the sale proceeds to the credit of the Suit. After preparation of inventory and sale of the goods, the Receiver was directed to deduct 5 % of the sale price towards his remuneration, keep the balance in a separate bank account in a bank of his choice and to hold the same free from lien or encumbrances, subject to further orders of the Court.

3. Justice Soumitra Sen was also appointed as a Special Officer by Calcutta High Court in another case (an Appeal arising out of C.P. No. 226 of 1996). In that case (C.P. No. 226 of 1996), the High Court had directed payment of Rs. 70,00,000/- to the workers of Calcutta Fans, a company in liquidation and Mr. Justice Soumitra Sen, then a practising Advocate, was appointed as a Special Officer to disburse that amount to the workers, S.B. Account No. 01SLP0013400 was opened by him for that purpose and the amount of Rs. 70,00,000/- meant for disbursement for workers was deposited in that account on February 7, 1997. A sum of Rs. 25,00,000/- from Special Officer's account was invested by Justice Soumitra Sen with a company M/s. Lynx India Ltd., which, later on went into liquidation.

4. On March 7, 2002, Steel Authority of India Limited (Plaintiff) wrote a letter to the Receiver asking him to furnish information and detailed particulars about the sale proceeds received by him and the amount of interest which had accrued thereon. The Receiver did not supply the information sought by the Plaintiff. Thereupon, the Plaintiffs filed an application (GA No. 875/2003) for direction to the Receiver to handover the sale proceeds and render true and faithful account of all the moneys held by him. No affidavit was, however, filed by the Receiver inspite of the notice being served on him. When the application came-up for hearing before a Single Judge of the Calcutta High Court, the Receiver, who, by that time been elevated to the Calcutta High Court, did not come forward to assist the Court either by filing an affidavit or by giving information through any lawyer or recognized agent, despite service of the copy of the application on him.

8. The learned Judge, after adjustment of the amount deposited by the Receiver during the pendency of the application, directed him to deposit Rs. 52,46,454/- which included interest on the amount appropriated by him. Pursuant to the above-referred order of Calcutta High Court, Justice Soumitra Sen (the erstwhile Receiver) deposited money in terms of the Order of the Court. In all, a total sum of Rs. 57,65,204/- was deposited by him.

9. Reports appeared in newspapers concerning the conduct of Justice Soumitra Sen in the above-noted matter. The then Chief Justice of Calcutta High Court withdrew judicial work from him and wrote a letter dated 25th November, 2006 to my learned predecessor bringing the matter to his notice for appropriate action.

12. On 10th September, 2007 I had asked Justice Soumitra Sen to furnish his fresh and final response to the judicial observations made against him. After seeking more time for this purpose he furnished his response on 28th September, 2007 requesting that he may be allowed to resume duties in view of the order of the Division Bench of Calcutta High Court.

13. Since I felt that a deeper probe was required to be made into the allegations made against Justice Soumitra Sen, to bring the matter to a logical conclusion, I constituted a three Member Committee consisting of Justice A.P. Shah (Chief Justice, Madras High Court), Justice A.K. Patnaik (Chief Justice, High Court of Madhya Pradesh) and Justice R.M. Lodha (Judge, Rajasthan High Court), as envisaged in the 'In-House Procedure' adopted by Supreme Court and various High Courts, to conduct a fact finding enquiry, wherein the Judge concerned would be entitled to appear and have his say in the proceedings.

14. The Committee submitted its report dated 1st February, 2008, after calling for relevant records and considering the submission made by Justice Soumitra Sen, who appeared in-person before the Committee. The Committee inter alia concluded that:

(a) Shri Soumitra Sen did not have honest intention right from the year 1993 since he mixed the money received as a Receiver and his personal money and converted Receiver's money to his own use:

(b) There has been misappropriation (at least temporary) of the sale proceeds since:

ii. a sum of Rs. 22,83,000/- was transferred by him from that account to Account No. 01SLPO813400 and, thereafter, almost entire amount was withdrawn in a couple of months reducing the balance to the bare minimum of Rs. 811.56, thus, diverting the entire sale proceeds for his own use and with dishonest intention.

d) mere monetary recompense under the compulsion of judicial order does not obliterate breach of trust and misappropriation of Receiver's funds for his personal gain;

e) the conduct of Shri Soumitra Sen had brought disrepute to the high judicial office and dishonour to the institution of judiciary, undermining the faith and confidence reposed by the public in the administration of justice.

In the opinion of the Committee misconduct disclosed is so serious that it calls for initiation of proceedings for his removal.

In view of the foregoing, it is requested that proceedings for removal of Justice Soumitra Sen be initiated in accordance with the procedure prescribed in the Constitution. 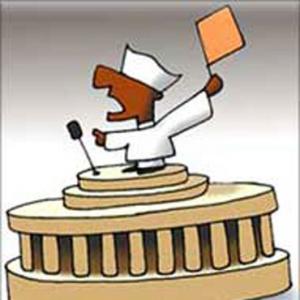 Here's what our MPs will decide in Budget Session