Union Minister Rajiv Shukla was on Tuesday caught in a controversy as he was heard telling Rajya Sabha Deputy Chairman P J Kurien to adjourn the House after the opposition created uproar over Comptroller and Auditor General report on coal blocks allotment to private firms.

Kurien, who was elected as the deputy chairman, had just occupied the chair when members of the entire opposition started shouting slogans against the Prime Minister Manmohan Singh and the government.

Amid the din, Shukla, who is minister of state for Parliamentary Affairs, went to the chair and whispered in the ears of Kurien, "Pure din Ke liye House adjourn kara dijiye liye (Adjourn the House for the day)."

The whisper, however, was caught on Kurien's mike and got amplified. The House was adjourned soon after for the day. Significantly, minutes earlier Kurien, while accepting felicitations on his induction, had said that he will try to accommodate views of all members in running the House.

"Congress is engaging in double speak as on the one hand it is telling the Chair to adjourn the House and on the other hand they are blaming the BJP for causing disruptions.

"They have been badly exposed and they are not interested in running the House," Javdekar added.

Former Lok Sabha Secretary General Subhash Kashyap disapproved of Shukla's conduct saying "It is undignified for a member to walk upto the chair and advise...members or ministers should speak from their seat."

Former Lok Sabha Speaker Somnath Chatterjee, however, said that Shukla may have given a suggestion which was not binding on the Chair.
PTI
Source: PTI© Copyright 2022 PTI. All rights reserved. Republication or redistribution of PTI content, including by framing or similar means, is expressly prohibited without the prior written consent.
Related News: Rajiv Shukla, House, J Kurien, Bharatiya Janata Party, Congress
Print this article 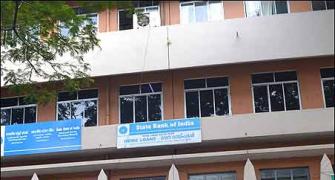 PSU bank unions to go on two-day strike
Use of chemical weapons red line for US: Obama to Syria