Rajasthan Assembly on Saturday passed a resolution urging the Centre to repeal the Citizenship (Amendment) Act, amid opposition by the Bharatiya Janata Party which accused the ruling Congress of pursuing appeasement politics. 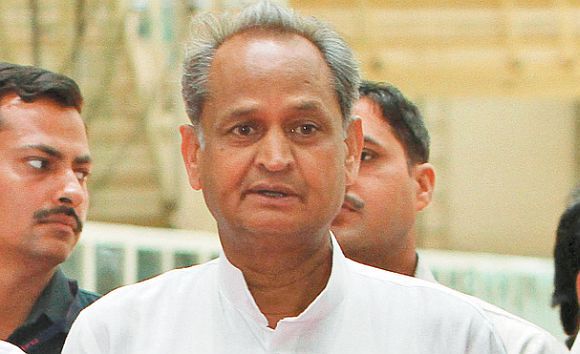 It is the second Congress-ruled state after Punjab to pass such a resolution.

Earlier, Kerala Assembly too had passed a resolution against the CAA moved jointly by the ruling Left alliance and the opposition Congress-led United Democratic Front.

The Rajasthan Assembly passed by voice vote the resolution which also asked the Centre to withdraw the new fields of information proposed to be included in National Population Register (NPR), 2020.

"It is evident that the CAA violates the provisions of the Constitution. Therefore, the House resolves to urge upon the government of India to repeal the CAA to avoid any discrimination on the basis of religion in granting citizenship and to ensure equality before law for all religious groups of India," Parliamentary Affairs Minister Shanti Dhariwal said while moving the resolution in the House.

Leader of Opposition Gulab Chand Kataria questioned the 'right to challenge' the Act in the state assembly.

"Granting citizenship is a matter under the Centre and and in such a situation do we have the right to challenge the CAA.... The Congress should stop doing appeasement and vote bank politics," the BJP leader said.

As soon as Dhariwal moved the resolution in the House, BJP legislators trooped into the Well, shouting slogans against the government's move. However, later they participated in the debate.

"CAA has caused deep anguish and widespread protests all over the country. The state of Rajasthan has also witnessed protests against this legislation which have been peaceful and have involved all segments of our society," Dhariwal said.

During the debate, the opposition BJP attacked the Congress and said that there is no reason to bring the resolution against the CAA as it has been enacted by Parliament and the matter is sub judice.

State BJP chief Satish Poonia said that granting citizenship to minorities living in Pakistan was endorsed in the past by prominent leaders like Mahatma Gandhi and former prime minister Indira Gandhi.

The Congress has brought the resolution for its political agenda and appeasement politics, Poonia, who is an MLA from Amber constituency, said.

Other BJP leaders including Kiran Maheshwari and Vasudev Devnani said that the population of minorities in Pakistan, Bangladesh and Afghanistan has reduced due to atrocities inflicted on them.

The Citizenship (Amendment) Act, 2019 that has been enacted by Parliament recently is aimed at distinguishing illegal migrants on the basis of religion. Such discrimination of people on the grounds of religion is not in consonance with the secular ideals enshrined in the Constitution and is clearly violative of Article 14, it said.

It further stated that it is for the first time in the history of the country since Independence that a law has been enacted which discriminates against people on religious grounds.

"It would threaten the secular fabric of the country. In addition, no new provision has been made in the Act in respect of migrants from other neighbouring countries like Sri Lanka, Myanmar, Nepal, Bhutan etc. Why this has been done has also raised apprehensions in the minds of the people at large," Dhariwal said.

The Parliamentary Affair Minister said that similarly there is widespread apprehension amongst a large section of people in the country that the NPR is a prelude to the National Register of Citizens (NRC).

He said that the kind of additional information that is proposed to be sought from all persons is likely to cause considerable inconvenience to the population at large without much tangible benefit.

Dhariwal said that Assam is an example of the same.

Therefore, the minister said, the House further resolves to urge upon the central government that in addition to revoking the CAA, it should also withdraw the new fields of information that have been sought for updation NPR, 2020, and that, to allay apprehensions in the minds of the people, the work of enumeration under NPR should be taken up only thereafter.