Rajasthan Governor Kalraj Mishra on Wednesday sent back Chief Minister Ashok Gehlot's third proposal demanding a session of the Legislative Assembly amid the ongoing political crisis in the state. Gehlot, after the proposal was returned, went to meet Mishra at Raj Bhawan. "Rajasthan Governor has returned the proposal for calling an Assembly session for the third time. I am going to meet him to know what he wants," Gehlot told reporters.

Mishra had earlier clarified that Raj Bhavan had never intended "not to call" the assembly session and asked the Ashok Gehlot government to deliberate on three points including a 21-day notice period for convening a session and maintaining social distancing norms.

He had said the statements from the state government make it clear that it wants to bring a trust vote but there is no mention of it in the proposal sent for convening the session.

He had said the Congress party will approach the president and, if required, will stage a protest outside the Prime Minister's residence over the political situation in the state.

Rajasthan Congress is in turmoil after simmering differences between Pilot and Chief Minister Ashok Gehlot came out in the open. Pilot was removed as the Deputy Chief Minister and the state unit chief of Congress. The Congress has accused the Bharatiya Janata Party of indulging in horse-trading to bring down the Gehlot government. The BJP has rejected the allegations. 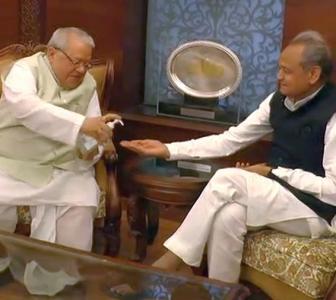 Cong has created atmosphere of anarchy in Raj: BJP