A jubilant Digvijaya Singh said "Rahul's responsibility until now was limited, but now the entire Congress organisation is under him" when asked how different would it be for Rahul Gandhi when he was all already the number 2 in the party.

"We welcome this step. It was long overdue. It was a matter of public debate for the last three-four months," he said.

Talking about its impact on senior leaders of the party he said, "We will be working with much more responsibility and accountability than what we were doing earlier."

When asked how it will change the work profile of party president Sonia Gandhi, Singh told rediff.com, "Now Rahul Gandhi will be with Sonia Gandhi to share her burden."

Singh dismissed a question on a likely contest between Rahul Gandhi and Gujarat Chief Minister Narendra Modi in the 2014 general election. "Modi is restricted to Gujarat while Rahul Gandhi's presence is all over India, so they can't be compared."

Singh also explained that Rahul's new role means more dynamism and more proactive involvement of him in all organisational matters. 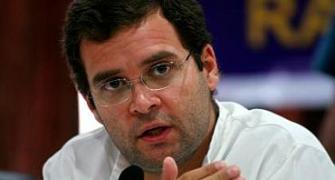 Time for Gen Next in Congress, Rahul to take charge

Cong leaders differ over quota for women, youth in party