Unfazed by the absence of leaders of the Left, the Janata Dal-United, the Samajwadi Party and the Bahujan Samaj Party, Congress leader Rahul Gandhi and Trinamool Congress chief Mamata Banerjee along with some regional parties on Tuesday sought to put up a united face raising the pitch against demonetisation by demanding the resignation of Prime Minister Narendra Modi. 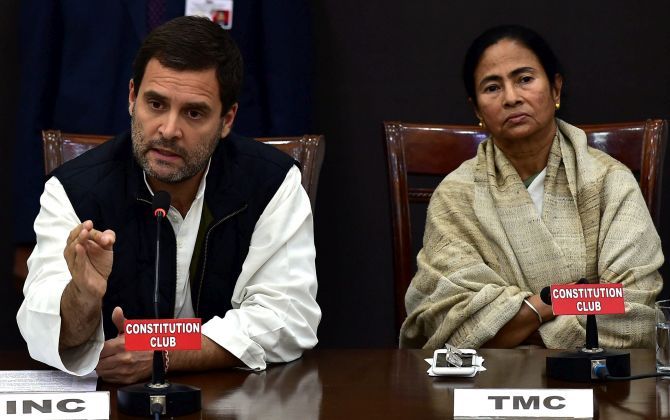 After the eight-party meeting, the leaders also sought a probe into the issue of "personal corruption" of Modi with Gandhi insisting that a "free and fair" inquiry was needed to maintain the credibility of the prime minister's post.

Banerjee, whose presence rescued the Congress' plan of replicating the opposition unity witnessed in Parliament recently on the note ban issue, virtually stole the show by placing the resignation demand, a position subsequently echoed by Gandhi.

Both Gandhi and Banerjee spoke of a "common minimum agenda" being evolved to take the opposition unity forward even as he downplayed the absence of several other parties, including the Left, from the meet which preceded the press conference.

Escalating the attack on Modi, Gandhi described the note ban as a "single arbitrary financial experiment in the history of the world that affected 1.3 billion people" and asked him to explain the "real" reason for implementing it and take responsibility for giving pain to people.

"Will you take responsibility over demonetisation and resign. Will you resign from prime ministership," Banerjee asked, as she termed demonetisation as a "mega scam" in the name of "achhe din" (good days).

The West Bengal chief minister said that 47 days are over and only three days are left in the 50-day period sought by Modi for return of normalcy post the note ban.

"He is not a magician to perform magic. No miracle will happen. You promised to bring 'achhe din'. Are these 'achhe din'? In the name of cashless, Modi government has become faceless and baseless.

"Demonetisation is not a small issue. If government becomes weak, the country is weakened," she said.

Asked what if the PM did not resign, Gandhi said, "If he does not resign, we will put pressure on him to resign."

The Congress leader said, "It was on the prime minister's personal initiative that this arbitrary financial experiment was carried out for the first time in the world history that affected 1.3 billion people. Such an experiment was never done even during Mao's reign in China."

Gandhi also claimed that demonetisation has made no impact on black money and dubbed it as "an attack on financial independence" and poor people of the country.

Asked about former Delhi Chief Minister Sheila Dikshit's name figuring in the same documents, Gandhi replied, "Sheilaji herself is saying that she has no problem with an inquiry.

"Why Narendra Modiji is not saying that. While there are many names in 'Sahara diaries', his name appears clearly in the e-mail of Vice President of Aditya Birla group."

The parties whose representatives were present at the meeting were the Rashtriya Janata Dal, the Dravida Munnetra Kazhagam, the Janata Dal-Seular, the Jharkhand Mukti Morcha, the Indian Union Muslim League and the All India United Democratic Front, besides the Congress and the Trinamool Congress.

In the just-concluded Parliament session, Gandhi brought together a total of 16 opposition parties on the note ban issue, some of which distanced themselves after his meeting with the prime minister on December 16 on farmers' issues.

Gandhi claimed that demonetisation has "failed" on fronts like countering terrorism, counterfeit currency, black money and corruption -- all stated objectives of the prime minister.

With the prime minister alleging that only the corrupt are opposing the note ban, the Congress vice president said that Modi can take whatever action he wants against the leaders.

At the same time, he said that the opposition would be one with government in any legislation to tackle corruption, including the one on Benami properties. He said he should make public the names of all those who have accounts abroad and bring back absconding businessmen Vijay Mallya and Lalit Modi.

On the 'Sahara-Birla' matter, Gandhi sought to dismiss BJP's claims that the Supreme Court has not found any merit in the allegations. 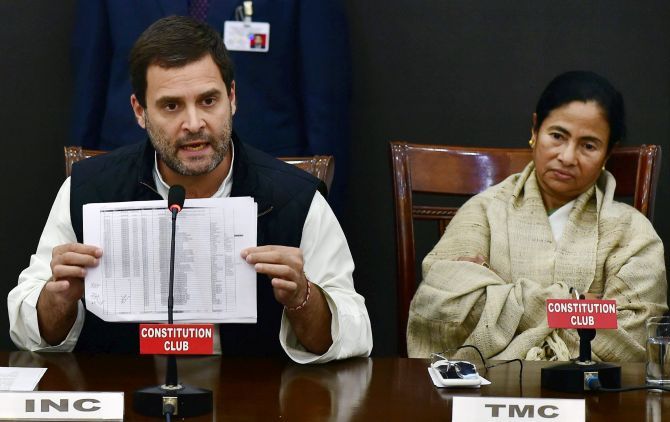 Some observations might have come but the judgment is yet to come, he said.

Singling out Modi, Banerjee said that the country was witnessing a "super emergency" under his rule without its formal declaration.

All sections of society are being frightened by saying "Gabbar is coming, Gabbar is coming", the West Bengal chief minister said suggesting that the country cannot be run through such threats and accused the PM of taking away people's rights.

She also accused the Centre of playing politics with non-BJP ruled states wondering as to why her state should not get what Assam gets.

She also hit out at the prime minister "for not taking Parliament into confidence" on such a big decision as demonetisation.

"Not even a single line statement was laid on the table of the House. This is not only unethical, it is illegal and unconstitutional," she said.

Alleging that demonetisation has wreaked havoc, she said that it has seen growth in unemployment and a collapse of the banking system.

Making fun of the digital push by the Modi government in the wake of demonetisation, Banerjee said that it was strange "given the fact that in 92 per cent of the villages in the country, there are no bank branches".

She claimed that even in advanced countries like the United States and Germany, the transactions are to the tune of 40 per cent.

He held the prime minister responsible for it and said the rich had been benefited and the poor 'looted' and termed the situation as "very serious".

DMK's Tiruchi Siva said "the country is facing a financial crisis" due to demonetisation and people have been made to suffer as its implementation has been "ill conceived". 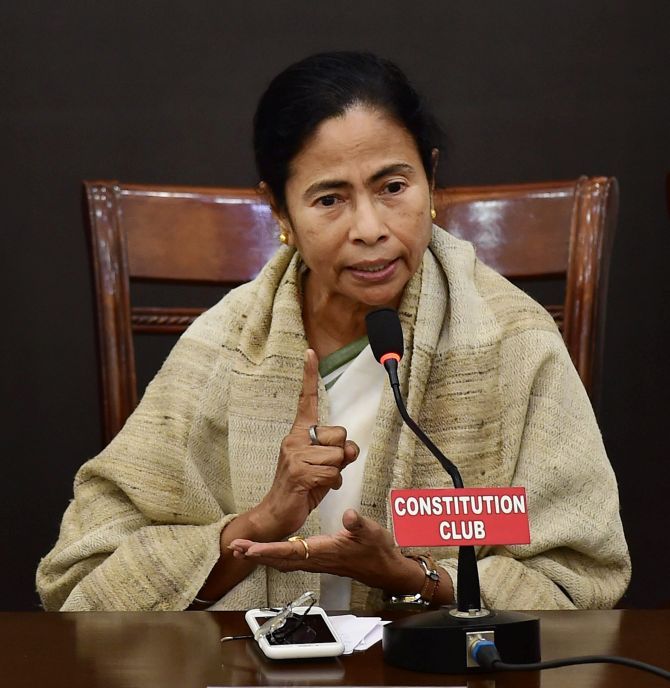 He said the initiative has turned out to be an "utter failure. Heroism is different from realty".

Banerjee said people have become "landless, cashless and voiceless" and "we have come together to lend voice to people, who have been suffering".

Meanwhile, CPI leader D Raja, whose party did not attend today's opposition meet, said the December 30 deadline on demonetisation has led to "a financial chaos and turmoil in the country, causing unimaginable misery and hardship to people.

"The economy as a whole is affected which has led to loss of jobs. It has ruined the livelihood of common people.

"The prime minister should own up responsibility and tell the people what forced him to take such a decision," Raja said, asking how could so many people be caught with huge amounts of new currency.

Gandhi also recalled that in the Jain diary case, four Congress ministers as well as BJP leader L K Advani had resigned from the Lok Sabha and suggested that the prime minister should also do so as there are allegations against him.

Advani was later exonerated in the matter.

The Congress leader claimed in the 'Sahara-Birla diaries' case, the Income Tax officials have demanded investigations and noted them in the file.

Since there is a question mark on honesty and integrity, a free and fair inquiry is needed, he said.