Take '100% responsibility' for defeat, CWC will decide my fate: Rahul

Congress president Rahul Gandhi said on Thursday he takes "100 per cent" responsibility for the defeat in Lok Sabha polls and congratulated Prime Minister Narendra Modi and the Bharatiya Janata Party on their spectacular victory, but asserted his party will continue to fight the ideological battle with the saffron party. Addressing a press conference at the party headquarters in New Delhi, Gandhi said the Congress Working Committee will meet soon and decide whether he should resign as the party chief following the electoral debacle.

"I congratulate Narendra Modiji and BJP for their electoral victory. People of India have decided that Narendra Modi will be the PM again and I fully respect that," Gandhi said.

He said he accepts the people's verdict and congratulated the winners.

"I take 100 per cent responsibility for this defeat," he told reporters.

"Our candidates fought with whole of heart and courage. I want to thank them from my heart. Our fight is that of an ideology. There are two different set of thinkings -- one is that of Narendra Modi and BJP, and the other one is Congress... We would have to accept that in this election, BJP and Narendra Modi have won," he added.

The Congress could manage to add only a few seats to its 2014 tally of 44 seats.

Gandhi has conceded defeat in Amethi, a traditional bastion of his family, to BJP's Smriti Irani but won from the second seat he contested in Kerala's Wayanad.

Asked if he would step down as the Congress president, Gandhi said, "We will have a meeting of the Working Committee. And they will decide that there."

Asked again whether he would offer to resign, he replied, "That you can leave between me and the Working Committee."

"Frankly today, with all due respect, is the day of the mandate and I don't want to colour the decision of the people of India by getting into a long conversation with you about what I think, went wrong.

"Frankly today, it doesn't matter what I think went wrong, what matter is that the people of India have decided that Shri Narendra Modi is going to be prime minister and as an Indian, I fully respect people's verdict," he said.

"I want to say that today is not the day for me to go into the details of this mandate. Today is the day that a new prime minister has been elected and today is the day to wish him all the best and, hopefully, he will look after the interests of this country," he said.

Gandhi said Congress will continue to fight the ideological battle with BJP and asked his party workers and leaders to not be afraid.

Gandhi also congratulated Irani, his rival in Amethi constituency in Uttar Pradesh, on her victory. The Congress president had won three consecutive terms since 2004.

Gandhi said there are a lot of people who believe in the Congress's ideology and he would like to assure them there is nothing to worry. 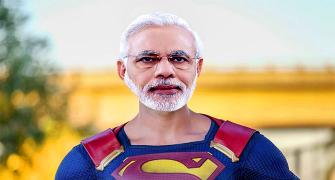 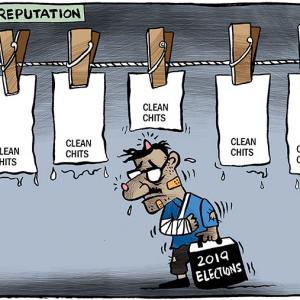