SC raps govt over handling of farmers' stir; says it may stay 3 laws

The Supreme Court on Monday rapped the Centre over the prolonged impasse with the protesting farmers demanding the repeal of the three new farm laws, saying it was 'extremely disappointed' with the negotiation process, and also expressed its inclination to stay the implementation of the acts. After some tough talk that the Centre has been given a 'long rope' and 'failed' to break the deadlock and not been 'effective' in handling the stir, the court said it will pronounce orders on Tuesday on various issues related to the farm laws and the farmers' ongoing stir at Delhi borders.

It also proposed setting up a committee headed by a former Chief Justice of India (CJI) to find ways to resolve the impasse.

At a virtual hearing, a three-judge bench headed by Chief Justice S A Bobde questioned the Centre's vehement opposition to its suggestion that the implementation of the farm laws enacted in September be kept on hold for the time being so as to help find an amicable solution.

The Centre and the farmer unions have held eight rounds of talks without any breakthrough while the protests by farmers at Delhi's border points began on November 28.

During the eighth round on January 7, the Centre had firmly ruled out repealing the contentious laws while the farmer leaders said they are ready to fight till death and their 'ghar waapsi will happen only after law waapsi'.

"We have given you long rope, Mr Attorney General, please don't lecture us on patience," the court told K K Venugopal.

"We don't know whether you are part of the solution or part of the problem. We don't think you are being effective."

Solicitor General Tushar Mehta told the bench, also comprising Justices A S Bopanna and V Ramasubramanian, that the top court has made 'harsh observations' regarding the handling of the situation by the government.

"That was the most innocuous factual thing for us to say," the bench responded.

The court also expressed apprehensions that the protests might lead to violence and loss of lives and property if it continues for long. "We don't want anybody's blood on our hands."

It asked the parties to suggest two-three names of former CJIs including R M Lodha who can head the apex court-appointed panel.

At the outset, the bench said, "What is going on? States are rebelling against your laws."

The apex court, which was hearing a clutch of pleas challenging the new farm laws as well as the ones raising issues related to the ongoing agitation at Delhi borders, said it is not talking about the repeal of these farm laws at the moment.

"This is a very delicate situation," it said, adding, "There is not a single petition before us which says that these farm laws are beneficial."

"We are not experts on economy; you tell us whether government is going to put on hold farm laws or we will do this. We are sorry to say that Centre has not been able to solve the problem and the farmers agitation," it said, adding, "We don't see why there is an insistence on implementation of the law."

Farmer leaders said they would continue their agitation even if the government or the Supreme Court stays the implementation of the new agri laws.

The leaders, who said they were 'sharing their personal opinion', were also of the view that a stay is 'not a solution' as it is only for a fixed period of time.

When Attorney General Venugopal told the court that the next meeting between the government and farmers is scheduled for January 15 and the court should not pass any order today, the bench said, "We do not think the Centre is handling the issue correctly. We have to take some action today."

He also contended that a law cannot be stayed unless the court finds it violates fundamental rights or constitutional schemes.

"A law cannot be stayed by the Supreme Court unless the Lordships find that it violates the fundamental rights or constitutional schemes. Law has to be without the power to legislate, only then it can be stayed. No petitioners have raised any such issues," Venugopal said.

The court, however, observed, "We are doing this because you have failed to solve the problem. We are sorry to say that you have not been able to solve this problem.

"The Union of India has to take the responsibility. The laws have resulted into a strike and now you have to solve the strike."

It also said, "Of course, usually we are against stay of any laws."

The court said it may stay the implementation of the farm laws as talks between the government and farmers are 'breaking down' because the Centre wants to discuss these legislations point by point, while the farmers want them to be repealed.

The court said that till date it has not been told anything by the Centre on the proposal given by it to keep the implementation of the laws in abeyance for some time.

"Our intention is to see whether we can find an amicable solution to all this. That is why we had asked you (Centre) whether you are willing to keep these laws on hold for sometime. But you wanted to buy time."

"We are still thinking it is equally important that we stay the implementation of law without staying the laws," it observed.

To this, Venugopal said, "This amounts to same thing."

At this stage. the court said it will constitute a committee headed by a former CJI to resolve the impasse.

It suggested that a stay on implementation of these laws will help the committee in finding solution.

"If laws are put on hold then negotiations will have a chance to work out."

"After the implementation of farm laws are stayed, you can carry on with the protests and we don't want anyone to say that we stifled the protest," the court told the advocates appearing for several farmer organisations.

Justice Bobde asked the protesting elderly farmers, women and children to go back home, as the court expressed serious concern over protestors sitting in severe cold and COVID-19 pandemic situation.

"Let me take a risk and say Chief Justice of India wants them (protesting farmers) to go back to their homes. Try to persuade them," he said.

"People are committing suicide. People are calling names. People are suffering in cold and pandemic situations. If not cold, farmers are in danger of COVID," the bench said, and asked lawyers appearing for the farmers unions to persuade the protestors to go home.

The court reiterated the need for having a committee comprising representatives from the government and farmer organisations from all over the country and said it will stop the implementation of these laws if the panel advises to do so.

"Whether you have faith or not, we are the Supreme Court of India, we will do our job," it told the farmer unions.

When the issue of law and order was raised before the bench, the court said, "These issues will be taken care by police. Right to protest is intact and Gandhiji exercised Satyagraha. That agitation was much bigger." 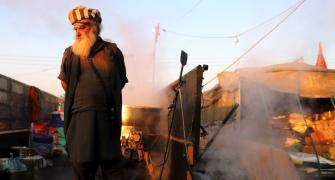 SC has no role in ending 'political deadlock': Farmers Ghar wapsi only after law wapsi: Farmers at talks