News
Business
Movies
Sports
Cricket
Get Ahead
Money Tips
Shopping
Sign in  |  Create a Rediffmail account
Rediff.com  » News » Punjab to give job to kin of farmers who died during stir

Punjab Chief Minister Amarinder Singh on Friday announced job for a member of the family of each farmer from the state who died during the agitation against the Centre's new farm laws. 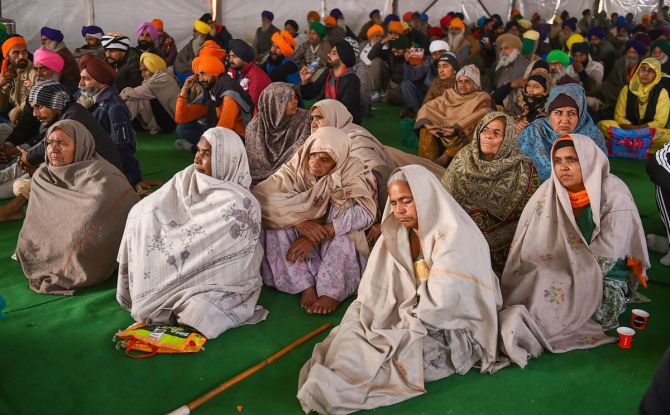 Singh said he has received a report that 76 farmers from the state have died so far.

“All Punjabis are concerned about our farmers sitting on the Delhi borders. They are there to persuade the Centre to repeal that laws that were implemented without taking us into confidence,” he said.

“Lots of old people are sitting there at the (Delhi) borders not for themselves but for the future of their children and grandchildren,” said Amarinder Singh, adding that “we are losing our farmers to the cold every day, with an estimated 76 farmers dying so far”.

In addition to the Rs 5 lakh compensation being given to the families of the dead farmers, his government will also give job to a member of their family, he added during the 20th edition of his Facebook Live #AskCaptain session.

The CM also slammed the Shiromani Akali Dal and Aam Aadmi Party for spreading "lies" over the farm laws and dubbed the Centre's refusal to repeal them as "inhuman".

Farmers from Punjab and Haryana have been camping at Delhi's borders for several weeks, demanding the repeal of the farm laws and a legal guarantee on the minimum support price for crops.

“We are with farmers and will stand by them,” he said in a statement.

On the National Investigation Agency notices to some farmers and supporters of the agitation, the chief minister said it was a “wrong step” and he would be writing soon to the Union home minister over it.

Even the Khalsa Aid, a humanitarian NGO which is working across the globe, has not been spared, said the CM.

“If you talk to Punjabis nicely and persuade them, they will agree to your suggestions, but if you pick up a stick, they too will pick one,” he said.

Hitting out at the Centre for pushing the laws through Parliament with “brute majority”, the CM said, “Is there a Constitution in the country? Agriculture is a state subject under Schedule 7, so why has the Centre interfered with a state subject.”

Amarinder said the Centre should repeal the laws.

The CM agreed with a Tarn Taran resident that the Centre was being ‘arrogant’ and was not thinking about the impact of the farm laws on the farmers.

Stressing that representatives of almost all farm unions from across the country are sitting at the Delhi borders, the chief minister said the agitation was of the entire nation's farmers and not just those from Punjab.
He recalled that farmers had been getting the minimum support price since 1966, with the Congress first introducing it, and nobody had any doubts about its continuation till now because of these farm laws which were aimed at ending the MSP and mandi systems.

“And if that happens, the foodgrain currently procured by the Centre for use in PDS distribution will also end. Who will then give food to the poor,” he asked. 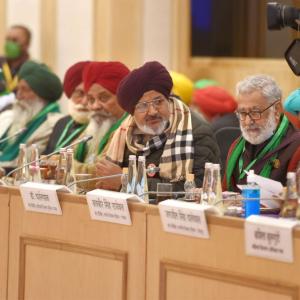