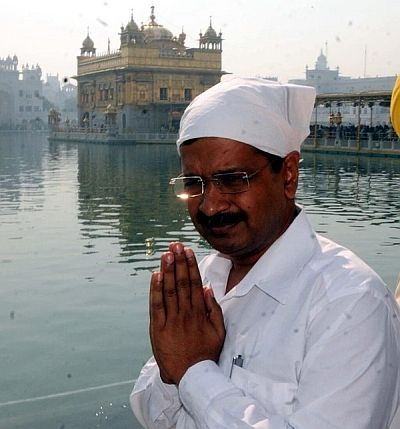 Aam Aadmi Party eyeing to wrest power in Punjab in the 2017 assembly polls, on Sunday unveiled its 31-point 'Kisan Manifesto' with an action plan to prevent farmer and farm labourers suicides and make them debt free and prosperous by December 2018.

The manifesto was released by Manifesto committee chairman Kanwar Sandhu at a party rally in Baghapurana which was later addressed by AAP national convenor and Delhi chief minister Arvind Kejriwal.

Sandhu said that the party will re-enact Sir Chhotu Ram Act of 1934 (Moneylenders' Debt) in which under no circumstances will the sum of interest payable exceed the principal amount.

"All debts where a farmer has paid a sum twice the amount of the principal shall be deemed to be wholly discharged," he said addressing the gathering on the occasion.

Every property mortgaged by a debtor whose debt is deemed to be discharged shall stand released, Sandhu said adding that no indebted farmer shall be dispossessed of his land holdings and house.

"Interest on loans of other farmers will be waived off. Punjab farmers to be debt free by December 2018," he said.

No coercive recovery proceedings against farmers will be launched till December 2018 when they will be debt free, Sandhu said.

To make up crop loss, compensation of Rs 20,000 per acre for crop loss due to drought, floods, pest attack, unseasonal rain, will be given, he said.

In the event of crop failure, farm labourers shall be given a compensation of Rs 10,000 for every month of loss of work, the AAP leader said.

Full implementation of Swaminathan Commission Report on crop pricing will be done by December 2020.

He said that re-registration of land acquired for the Sutlej Yamuna Link Canal by Congress and Shiromani Akali Dal governments earlier, will be done in the name of original owners.

It will be ensured that farmers get 12-hours of free electricity for farming, he said quoting the Manifesto.

Free medical treatment in government hospitals and cashless treatment up to Rs 5 Lakh per year in private hospitals for every farmer, farm labourer and his family will be provided, he said.

Provision of life imprisonment will be there for those involved in manufacture and sale of spurious pesticides, insecticides and spurious milk and their properties shall be confiscated, Sandhu said.

On farmer suicide, Rs 5 lakh compensation and a Government job for every eligible adult member of the families affected by farmer suicides in the past 10 years will be given to the aggrieved party.

Punjab will be declared a dairy state and 25,000 new dairy farms through various incentives like Interest free loans and subsidised electricity will be set up, he said.