The BJP's charge was that the matter was being politicised as Prime Minister Narendra Modi came from a poor family. 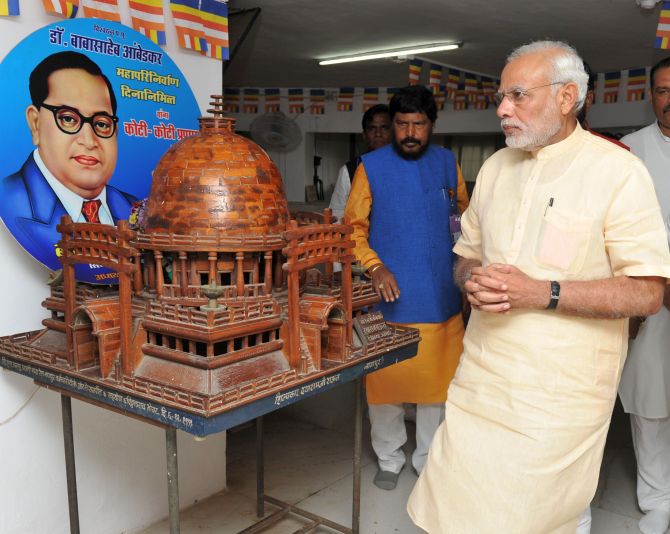 The Bharatiya Janata Party on Sunday claimed that it was the only "pro-Dalit" party and accused opposition parties, including the Congress and the Bahujan Samaj Party, of abetting violence over issues concerning the community as part of a conspiracy to vitiate the atmosphere.

The BJP fielded Union ministers Ravi Shankar Prasad and Thawarchand Gehlot to launch a counter attack on opposition parties, which have targeted the saffron party over Dalit issues.

They accused Congress chief Rahul Gandhi of fuelling the fire with his "lies and rumour-mongering".

The BJP leaders, however, parried queries on the statements of several Dalit MPs of their party, with Prasad maintaining that the party would talk to them and listen to their concerns.

It brought to fore the grievances of the community and also triggered a war of words between the opposition and the ruling BJP.

Gehlot, the most prominent Dalit leader of the BJP, said Dalit icon Bhimrao Ambedkar and BSP founder Kanshi Ram never supported violent protests as he attacked the Congress and the Mayawati-led BSP.

Prasad accused the two parties besides the Samajwadi Party of abetting violence as part of a conspiracy and said they were politicising the matter to polarise the country.

"The opposition should not work to divide the country for political interests," he said.

The BJP's charge was that the matter was being politicised as Prime Minister Narendra Modi came from a poor family and the BJP had largest number of Dalit and tribal MPs and MLAs in its fold.

Prasad claimed that the maximum violence was seen in those parts of Madhya Pradesh and Rajasthan where the Congress and the BSP had influence.

Opposition parties were trying to spread bitterness, casteism and regionalism in the country to target the BJP, he alleged.

Gehlot said the Narendra Modi-led government had strengthened the SC and ST (Prevention of Atrocities) Act with amendments in 2016 and done a lot to celebrate Ambedkar's legacy, including observing his birth anniversary with year-long events and building memorials in places linked to him.

Citing Gandhi's reported comments that the act had been abrogated, Prasad alleged that he was fuelling the fire with his lies.

To a question about Gandhi's planned fast, he said that the Congress leader had a right to do so but should refrain from spreading rumours.

Gehlot said Modi had been able to make his image of a "messiah" for weaker sections of the society, causing heartburn in the opposition.

Parties like the Congress and the BSP did nothing for Dalits and at times even worked against their interests, Prasad and Gehlot alleged.

It was Mayawati who as the Uttar Pradesh chief minister in 2007 wrote to the state police to stop misuse of the act while the Congress did not accord Bharat Ratna to Ambedkar for decades following his death in 1956, Prasad claimed.

Taking a dig at the Congress, he said the party had now discovered love for Ambedkar.

Citing the government's work to empower Dalits, Gehlot said the BJP was the only pro-Dalit party.

Dubbing the Union government as "anti-Dalit," the Congress has said its criticism by Bharatiya Janata Party's Dalits MPs has exposed it and asked Prime Minister Narendra Modi to break his "silence" and respond to their concerns.

The condition of scheduled castes can be understood when even the ruling party's MPs were underlining their fear and concerns, he told reporters.

Taking a dig at Modi's 2014 poll campaign around 'Chai pe charcha' and his monthly radio broadcast 'Mann ki Baat,' the Congress spokesperson asked the prime minister to engage in a 'charcha' (discussion) with his own party's Dalit MPs to listen to their 'Mann ki Baat'.

He said the situation due to rising atrocities on Dalits amid the government's lack of concern and inaction over the malady has reached such an alarming level that even the BJP MPs were now saying that the Modi government has done nothing for the community and that their condition has deteriorated under the government.

"The prime minister must break his never-ending silence on rising atrocities against Dalits and respond to the concerns and questions of his own MPs. BJP MPs' statements prove beyond doubt that PM Modi was working towards a ‘Dalit-mukt' India," Shergill said.

Taking a dig at the Prime Minister's directive to his party MPs to spend a night in a village with over 50 per cent Dalits and tribals population, he said the prime minister should first call his party's Dalit MPs to his house to address their concerns rather than doing these "PR stunts".

These Lok Sabha members have expressed concerns over issues facing Dalits. While some of the MPs like Udit Raj and Dohre have not targeted their party's top brass outright others like Singh and Phule have been explicit in their criticism of the government.

Modi's "stoic silence" shows the BJP-RSS is working towards making India Dalit-free and he was "enjoying" the anguish and pain of the scheduled castes and tribes, Shergill alleged.