Source: PTI
Last updated on: June 14, 2012 12:58 IST
In a rebuff to the Samajwadi Party and the Trinamool Congress, the Congress on Thursday ruled out sparing Prime Minister Manmohan Singh for the Presidential race as it rejected the three names proposed by the two allies, sending signals that it was not in a mood to bow before them.

"We cannot afford to spare Dr Manmohan Singh as the prime minister. The other two names -- APJ Abdul Kalam and Somnath Chatterjee -- are not acceptable," Congress General Secretary Janardan Dwivedi told the media.

"During UPA-II (election of leader), we have already said he (Dr Singh) will remain the prime minister till 2014. The Congress does not take such a step (of changing its leader) in between," he said.

His forthright assertion came after Congress President Sonia Gandhi held parleys with senior party leaders Pranab Mukherjee, A K Antony and P Chidambaram at her residence in the wake of the TMC and SP stunning the party by proposing the names of Dr Singh, Kalam and Chatterjee as a counter to candidature of Mukherjee and Vice President Hamid Ansari.

Virtually disapproving of Trinamool chief Mamata Banerjee's action of disclosing the names of Mukherjee and Ansari as first and second choices of Congress, Dwivedi said the process of consultation was still on and Gandhi had not finalised any name.

Gandhi is in the process of consulting even single-member parties and in the course of it two names have come up. "If the Congress had decided on the name, two names would not have come up," he said.

"There is a dignity to the process. When such talks are held, names are not discussed outside," the Congress leader said, apparently referring to Banerjee disclosing the names to the media immediately after meeting Gandhi at her residence on Wednesday.

The Congress Core Group, headed by Gandhi and including the PM and senior Cabinet ministers, will meet on Thursday evening to devise further strategy on the President's election.

Earlier in the day, Mukherjee drove to the 10, Janpath residence of Gandhi and was with her for about 30 minutes. Senior Congress leaders A K Antony and P Chidambaram also met Sonia Gandhi.

Gandhi also held discussions with other UPA allies like the Dravida Munnetra Kazhagam and the Nationalist Congress Party.

DMK Parliamentary leader T R Baalu met her and said Gandhi will be announcing the name of the UPA Presidential candidate anytime later this week.

"Keeping in view the political stature and seniority in public life, my leader Karunanidhi was consulted by Madam last month through Antony. My leader had suggested a name. The name has been communicated by Antony to Madam. Madam at any point of time, will be announcing the decision," Baalu told the media.

He said the name of the person cannot be divulged as of now and parried questions on whether the candidate is among the five persons whose names have been made public.     "Madam will announce it shortly. Not today... At any point within this week," he said.

When asked if DMK was fine with Mukherjee's candidature, he said, "It is between the two higher ups. My leader has communicated the matter long back. We stand by it." 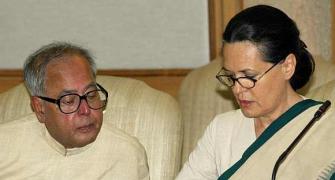 Your guide to politics over the presidential election 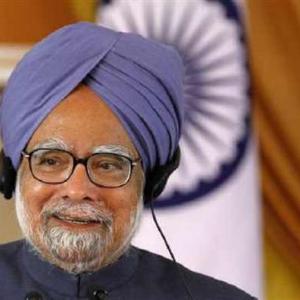