News
Business
Movies
Sports
Cricket
Get Ahead
Money Tips
Shopping
Sign in  |  Create a Rediffmail account
Rediff.com  » News » 'Lead India to the path of prosperity': Wishes pour in for Kovind

'Lead India to the path of prosperity': Wishes pour in for Kovind Congratulatory messages poured in for President-elect Ram Nath Kovind from all across the political spectrum, with some extending their best wishes on twitter or by calling him up.

President Pranab Mukherjee said in his message to Kovind: ‘I extend to you my heartiest congratulations on your election as the 14th President of the Republic of India.

‘I also offer my best wishes to you for a successful tenure. May you lead India to the path of democracy, stability and prosperity.’

Expressing her best wishes to Kovind, Congress chief Sonia Gandhi said the president enjoys a unique position as defender and protector of the Constitution and upholder of democratic traditions.

‘The president of India enjoys a unique position as defender and protector of the Constitution, upholder of democratic traditions and as supreme commander of the Indian Armed Forces,’ she said in a statement.

‘The president is the conscience keeper of the Constitution of India,’ she said conveying her best wishes to Kovind.

Gandhi also reiterated the Congress party's commitment to work for upholding these cherished values and established conventions which are the ‘intrinsic cornerstone of our Constitution’.

‘Congratulations Ram Nath Kovindji. Wishing you a great term as President of India,’ he tweeted.

M Venkaiah Naidu, who resigned as I&B and housing and urban affairs minister after he was named as the National Democratic Alliance’s vice presidential candidate, said Kovind’s rise to the highest office of the country from humble beginnings ‘speaks for the success of our democracy’.

“My long association of working with Kovindji tells me that he will prove to be an ideal president,” he added.

From Kovind’s home-state Uttar Pradesh, Chief Minister Yogi Adityanath congratulated him, saying the rural people are feeling proud of him and the honour of ‘Dalits’ has increased after a person from their section reached the top position.

He said it was a matter of pride for Uttar Pradesh that he hails from the state.

Recalling his experiences with Kovind as a fellow parliamentarian and later on as his counterpart in Bihar, UP Governor Ram Naik said he was the first person from the state to occupy the topmost constitutional post.

Haryana Chief Minister Manohar Lal Khattar said, “I heartily congratulate Ram Nath Kovind on being elected the 14th President of India. He symbolises the aspirations of the poor and the underprivileged. I wish him a promising and successful tenure.”

Former Punjab Chief Minister and Akali Dal stalwart Parkash Singh Badal in his message said that the NDA nominee's victory was also a victory of rational forces who wanted to take the country forward.

“We would like to congratulate Shri Kovind for the manner in which he managed to take everyone along with him due to the force of his personality and self deeds," Badal and his son and former deputy chief minister, Sukhbir Singh Badal said.

Jammu and Kashmir Chief Minister Mehbooba Mufti, in her congratulatory message to the president-elect, said that his victory marked an important milestone in the political history of the country.

She said that Kovind’s election reflects the empowerment of the underprivileged, backward, minorities and other weaker sections of the society.

Mehbooba hoped the tenure of Kovind would prove to be ‘inspiring, encouraging and egalitarian’.

Congratulating Kovind, Chhattisgarh Chief Minister Raman Singh said he is a leader connected with common people. He has served as advocate of high court, member of Rajya Sabha, Governor of Bihar, and has long experience of working in various sectors in his public life.

‘Kovind has worked hard for betterment of Dalit community and underprivileged sections of society while protecting their interests, he added.

‘I am very happy that the candidate I proposed has been elected the President. Hailing from a lower class, Kovind rose to the highest post of the country,’ Chandrababu said in a message.

‘Best wishes to the Hon Sri Ram Nath Kovind Garu, President of India. May the Indian democracy thrive under his able leadership,’ the chief minister tweeted.

Reddy expressed happiness over the election of Kovind as President and said ‘with his rich experience in public life he would certainly embellish the highest constitutional post’.

Manipur Governor Najma Heptulla said Kovind is a ‘good friend’ of her and ‘wished him a successful and memorable term’.

She also expressed hope that Kovind ‘will work for the benefit of the people and for the development of the country’.

Describing him as a veteran, Paul in his congratulatory message to the President said he had been a Rajya Sabha member, member of various parliamentary committees and governor in the past.

Kovind has had a long public life and has a deep knowledge of the law and the Constitution, Paul said.

Congratulating Kovind on his election to the top office, Rawat said under his leadership and guidance the country would certainly touch new heights of development.

“His (Kovind's) vast political, administrative experience and the high standards of probity set by him in public life will be a source of inspiration for everyone,” he said.

Assam Chief Minister Sarbananda Sonowal, in a telephonic conversation with Kovind, congratulated him and termed the election as good news for the people of Assam and the North East along with the rest of the country.

Sonowal, who was one of the proposers of Kovind as the NDA candidate, said the President-elect is well known for his strong advocacy of the rights of the weaker section of the society, social development and spread of education.

“Starting his journey from a farmer's family, Kovind Ji is now all set to adorn the top constitutional post of the country. His vast knowledge and understanding of the Constitution will immensely benefit the nation,” Sonowal added.

Jharkhand Chief Minister Raghubar Das said, “I extend my wishes for his successful and fruitful tenure.”

Telangana Chief Minister K Chandrasekhar Rao ‘hoped that Kovind would be successful in continuing the federal spirit of the country’s democracy’.

‘The CM hoped that under the leadership of Kovind the country will make progress in all fields. The CM also hoped that Ram Nath Kovind will be victorious in continuing the federal spirit which is a part of Indian democracy,’ a release from his office said.

Arunachal Pradesh Chief Minister Pema Khandu ‘pinned high hopes from Kovind that the nation would sail to newer heights under his leadership’.

CPI national secretary D Raja said Kovind should now act as a custodian of the Constitution.

He observed the race to Raisina Hill was a ‘very dignified one’, notwithstanding the different political and ideological lines followed by the NDA and the opposition. 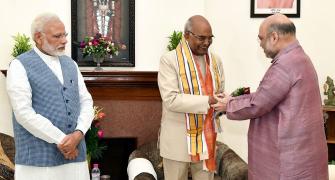 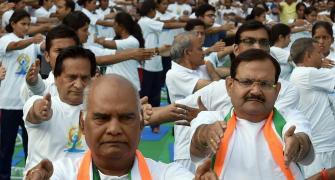 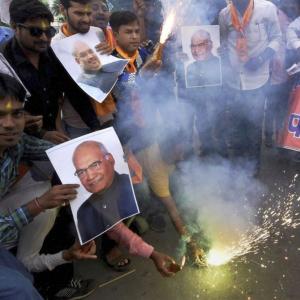 'Sense of huge responsibility': Kovind after being elected as 14th President 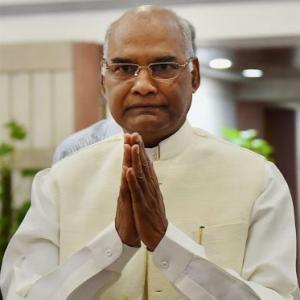