President Pranab Mukherjee will honour freedom fighters on the occasion of the 70th anniversary of the Quit India Movement on Thursday.

Freedom fighters from across the country will be invited to attend a reception at the Rashtrapati Bhavan where they would be honoured and felicitated in the presence of Vice-President Hamid Ansari, Prime Minister Manmohan Singh and former Presidents, Speakers of the Lok Sabha and other dignitaries, a Rashtrapati Bhavan press release stated.

Since 2003, the President has been hosting an 'At Home' function in the Rashtrapati Bhawan on the anniversary of the Quit India Movement on the August 8 every year to honour freedom fighters, the statement said.

Quit India Movement was launched on August 9, 1942. On August 8, 1942, the All India Congress Committee formally adopted in Bombay a resolution calling on the British to 'Quit India'.

The next day national leaders including Gandhiji were arrested by the British. From that very day, a spontaneous civil disobedience movement in response to Gandhi's call for immediate independence spread all over the country. 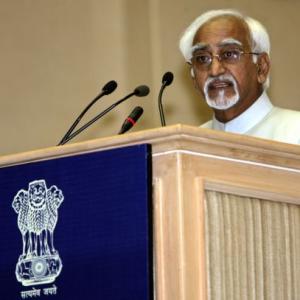 Monsoon session: UPA to face the heat despite triumphs