Pranab kicks off campaign for Prez post in Chennai

Launching his campaign for the Presidential election in which he appears set for a cakewalk, United Progressive Alliance nominee Pranab Mukherjee on Saturday appealed to all political parties to back his candidature, apparently eyeing Mamata Banerjee's Trinamool Congress.

The former finance minister, who enjoys a close rapport with Karunanidhi, said it was natural to start the campaign from Chennai as DMK was a stable partner of the UPA.

"DMK is a stable partner of UPA-I and UPA II. Therefore, it is quite natural that I have started my campaign with the blessings and support of Dr Karunanidhi and from Chennai itself," Mukherjee told reporters, ahead of his meeting with Members of Parliament and Members of Legislative Assembly of the Congress and other UPA allies, to enlist their support.

"I am seeking the support of those political parties which have not yet declared their choice for the Presidential election," he said.

After her joint proposal with Samajwadi Party chief Mulayam Singh Yadav backfired with the latter backing Mukherjee, Banerjee has kept everyone guessing on her support.

Mukherjee chose Chennai to start his campaign at the behest of the DMK patriarch.

Outgoing President Pratibha Patil had also chosen Chennai as the launch pad for her Presidential campaign in 2007.

A traditional welcome was given to Mukherjee when he arrived in Chennai. Karunanidhi's daughter and Rajya Sabha MP Kanimozhi, her husband Aravindhan and DMK Parliamentary Party leader T R Baalu warmly greeted Mukherjee.

Mukherjee, who arrived by a special aircraft, was given a rousing reception at the Tambaram Air Force Station. He was received by Union ministers Ghulam Nabi Azad, V Narayanaswamy and state Congress leaders.

Speaking at a dinner hosted by Karunanidhi, Mukherjee said he believed that some offices should not be sought after, but should be offered.

"The beauty of the Indian Constitution is that the notional Executive head (President) does not exercise the real executive power. But the President's office has its own significance and responsibilities, to uphold the spirit of Indian unity in diversity, pluralism because India is a multi-lingual, multi-religious, multi-cultural and multi-ethnic country."

"Therefore, I always believed that there are some offices which are not to be sought but offered. So I was really delighted when UPA Chairperson Sonia Gandhi offered me the post and this was endorsed by all leaders of the UPA," he told a meeting attended by DMK and Congress leaders including M K Alagiri, MK Stalin, P Chidambaram and GK Vasan.

He said he chose to campaign from Tamil Nadu with the support and blessing of Karunanidhi since he was not only the senior-most active political leader of the country today, but was also associated with him since the 1970s.

Reiterating that he enjoyed the support of the majority of the Electoral College where the numbers were "pre-determined", he appealed to undecided parties such as the Trinamool Congress to back him.

"For those who have not decided, including UPA partner Trinamool Congress and certain other parties, support the UPA candidate, who is being supported by parties who do not even belong to the UPA," he said.

Karunanidhi hailed Mukherjee as the "priceless jewel of Indian democracy," and said his victory was a foregone conclusion.

"You are the most suited to the post of President of India. You will definitely be a priceless jewel on the crown of Indian democracy," he said.

"She has not yet taken a decision. I have appealed to herI hope in due course of time, she will take a decision," he said.

Asked about his priorities after becoming President and whether he would take any step on the plea of three death row convicts in the Rajiv Gandhi assassination case, Mukherjee said the President's role has been clearly spelt out in the Constitution.

"In practice, what the President should do has been done by many illustrious Presidents.... I need not bother about working on any specific role," he added. 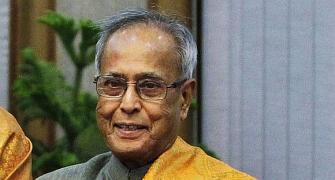 Why CPI-M's support to Pranab is a grave ERROR 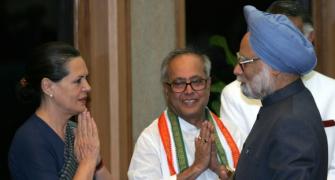 We will miss you, PM tells emotional Pranab
CPM trying to create rift between Cong and TC: Mamata 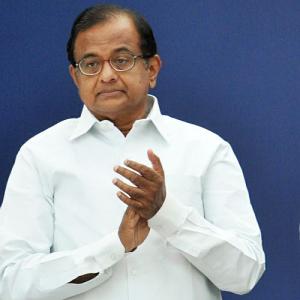