'Opposition parties now recognise that the king on one side of the chessboard, Prime Minister Narendra Modi, is ensconced, and unlikely to be shaken, although on his side there are no identifiable kings, queens, rooks, bishops or knights,' says Radhika Ramaseshan. 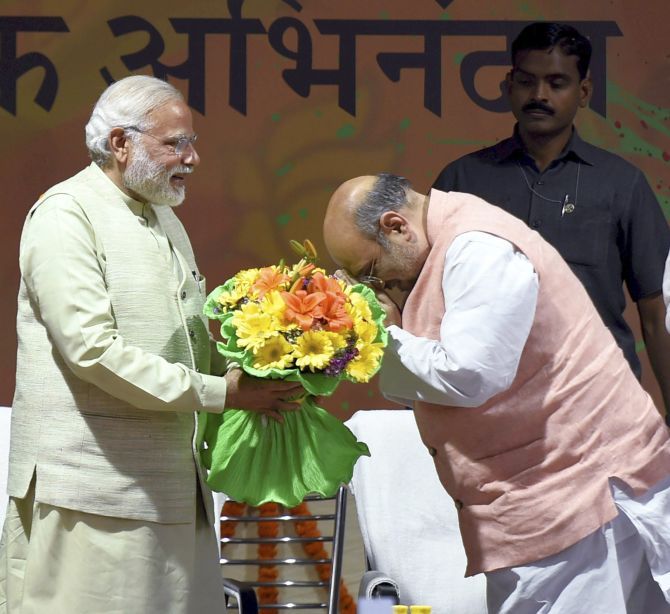 With a little over two years to go before the next Lok Sabha election, some pieces on the national political chessboard have started moving, thinking up the scenarios that could evolve from the prospective realignments emanating from the Bharatiya Janata Party's victory in Uttar Pradesh.

Opposition parties now recognise that the king on one side of the chessboard, Prime Minister Narendra Modi, is ensconced, and unlikely to be shaken, although on his side there are no identifiable kings, queens, rooks, bishops or knights.

Opposition sources said the Samajwadi Party's and Bahujan Samaj Party's rout in UP rule out Akhilesh Yadav and Mayawati as key players to shape and finesse a calculation for 2019.

The heartland always fancied itself as a crucial determinant of who would rule the Centre.

With UP under the BJP's belt, Modi aside, the chances of another leader emerging from its bowels are out.

That leaves the latter to root about the other states to get a king, if there is one.

Bhartruhari Mahtab, a senior in the Biju Janata Dal and in the Lok Sabha, believes the first big test is the coming polls to elect a new President.

"The BJP has a full majority and can possibly see through its own candidate. But, if the non-BJP forces put up a nominee, we can queer the BJP's pitch," said Mahtab, refusing to state if the BJD head, Odisha Chief Minister Naveen Patnaik, would initiate such a move.

The BJP's recent success in the Odisha local bodies' poll has spurred the BJD to look at the shifting sands in the state, where the party, in its fourth term in government, has been ruling unchallenged.

Asked if the BJP's inroads could bring the BJD and the Congress closer in Odisha and nationally, Mahtab said, "Nationally, it depends on whether the Congress wishes to expand its base by aligning with regional forces. But, in Odisha, the Congress is tying up with the BJP to install its heads in the district panchayats. How can we go with it?"

On balance, if it came down to choosing between the BJP -- a former BJD ally -- and the Congress, Mahtab indicated it could be the latter.

For, in the existing conditions, the BJD perceives the BJP and not the Congress as the greater threat.

"Let's look at the latest elections holistically. The Congress gained in Punjab and Goa, and retained Manipur. This shows it is the only alternative to lead a non-BJP front. These states also matter," he said.

However, the Janata Dal-United, a major regional protagonist, was unsure if the Congress could be the fulcrum of such a front.

Harivansh, a Rajya Sabha member of the party, suggests JD-U leader and Bihar Chief Minister Nitish Kumar was upset at the Congress' "indifference" in stitching a larger coalition to confront the BJP in Assam and UP. And wondered if it would seriously look at one in 2019, regardless of the BJP challenge.

The Congress contested the latest Bihar polls with the JD-U and the Rashtriya Janata Dal, won and became part of the government.

"Congress should have taken the lead (in UP) like Nitish did in Bihar, but nobody spoke to Nitish," said Harivansh.

He also underlines some snags in putting together a joint Opposition vanguard.

"Nitish supported demonetisation because he saw it as a message against the rich, with caveats. The Opposition tried to isolate him for allegedly taking a pro-BJP stand. Mamata (Banerjee) gave statements against him," he said.

Nitish alone, contends Harivansh, can match Modi, attribute for attribute. Hinting thereby that if a common front materialises, Nitish is capable of heading it.

"He's a serious politician, without advertising. He works 18 hours a day, there are no charges against him, he doesn't have a family (to get involved and create controversies) and has pulled Bihar out of misgovernance," claimed Harivansh.

The BJP's perspective on 2019 centres around Modi, admitting off the record that even its allies and entities that are "friendly" without being aligned with it feel "threatened" by the PM.

Therefore, party sources say, they would "not be surprised" if BJP ally Telugu Desam and "outside supporters" like the Telangana Rashtra Samithi and the All India Anna DMK could squeeze themselves in an anti-BJP formation before the next Lok Sabha election.

"The way we are expanding nationally under Modi, our footprints are bound to enlarge in Andhra Pradesh, Telangana and even Tamil Nadu," a BJP official said.

But all these projections also carry a reality check.

Namely, the BJP's ability to retain its winning streak in the slew of state elections preceding the Lok Sabha battle.

The BJP rules most of these states or is in the Opposition; its stakes are, therefore, high.

Gujarat and Himachal Pradesh go to the polls in December this year; Karnataka will follow in April 2018.

These are to be followed by those in Madhya Pradesh, Chhattisgarh and Rajasthan in November-December 2018, regarded as a precursor to the big battle.

Though that is not necessarily true -- in late 2003, the BJP had triumphed in these three latter states, infusing so much confidence that the Union Cabinet was persuaded to bring forward the schedule for the Lok Sabha election of 2004. Where the BJP lost to the Congress.

"A couple of defeats will detract from the pre-eminence we now enjoy. The elections in MP and Chhattisgarh would be especially tough because we have been in power for 15 years," a BJP functionary admitted.

Already, Amit Shah, the BJP president, has started working in Gujarat to tie up the loose ends that have frayed the government and lept the party on edge, after the leadership change and caste agitations.

Sources also spoke of the "enormous" challenges ahead in UP after the stunning mandate.

"We have to provide a semblance of governance, restore law and order, and balance the competing demands from castes," a state MP said.

Not the least of the BJP's tasks in UP will be accommodating the demands and wishes of the Rashtriya Swayamsevak Sangh.

The RSS and its affiliates formed the linchpin of the BJP's 'wrest UP' project but typically lay low.

Mandate won, BJP sources said, the Sangh's presence could be "more visible" and the audio level "more vocal" on issues such as legislating a common civil code, shutting down slaughter houses and allocating more land for crematoriums. 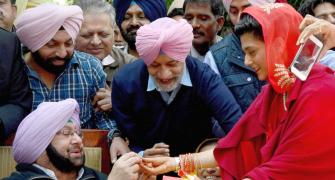