Source: PTI
October 15, 2010 15:16 IST
With curtains drawn over the Commonwealth Games, the Bharatiya Janata Party on Friday said it will "pursue" the alleged delay and corruption in Games preparations vigorously as reflected by the "mood of the people".

"The jury of the people is out. They cheered each player and artist but they jeered and booed Kalmadi and company. This shows the mood of the nation. So we will pursue issues of corruption and mismanagement in delays in preparations," BJP spokesperson Prakash Javadekar told PTI.

The Opposition had raised the issue of "delay and corruption" in Games preparations in a big way both inside and outside Parliament. However, when the Games began, the party brought down the tempo of its criticisms with senior BJP leader L K Advani saying "as an Indian" he wanted the event to be a success. He even praised the grand opening ceremony.

The BJP and its National Democratic Alliance partners had decided to wait for the Games to get over and then demand inquiries into alleged wrong-doings and corruption to avoid bad press in the international media and not to endanger the country's prestige, party sources said. The party intends to highlight the issue after Dussehra, they aded. 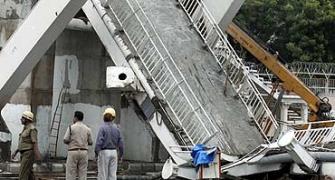 Are preparations for CWG falling apart?: