The Karnataka Legislative Assembly Committee probing the porngate episode involving three former BJP ministers on Wednesday began its three-day sitting, amid continued boycott by Congress and Janata Dal Secular members, saying it would try to submit its report by the March 13 deadline set by the speaker.

Four members of the committee, now reduced to an all Bharatiya Janata Party panel, led by Srishailappa Bidarur, discussed various issues to be brought under the purview of the inquiry.

"The committee will later decide on issuing notices to the three seeking their appearance before the panel," he said. "We discussed all issues relevant to the probe. We cannot disclose them. We will make efforts to complete the task and submit report by March 13 as per the deadline set by the speaker", he said.

S R Vishwanath, Nehru Olekar and Suresh Gowda, the other members of the committee were present. The committee has also written to regional channels to provide video footage aired by them on the incident.

"I have not received the resignation letters of Congress members and JDS member", Bidarur said. 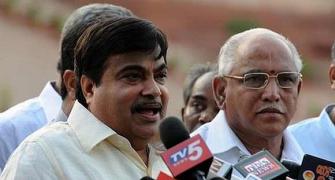