Aditi Phadnis predicts frequent stand-offs between the Centre and states in the future. 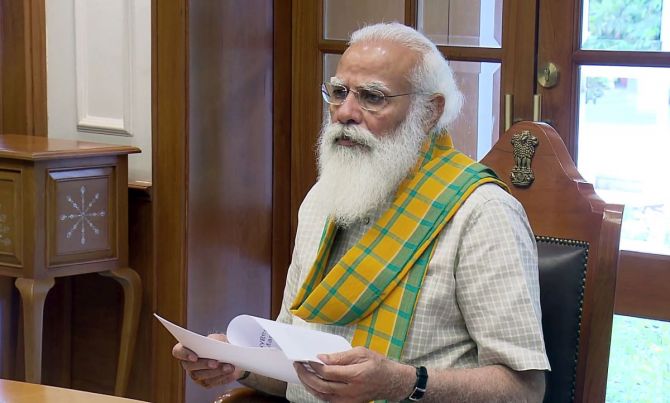 A more assertive non-Congress, non-Bharatiya Janata Party Opposition is on the cards after the stupendous victory of the Trinamool Congress in West Bengal, the Left Front in Kerala, and the Dravida Munnetra Kazhagam alliance in Tamil Nadu.

This is bound to manifest itself in fora like the GST Council, but more immediately in the distribution of vaccines to handle the pandemic, as both Pinarayi Vijayan and Mamata Banerjee announced tackling the pandemic would be their top priority and made it clear that a slowdown in vaccine delivery to states not ruled by the BJP would not be tolerated.

At her press conference after the results, Banerjee said her fight will be to ensure free vaccines to everyone across the country.

Tensions would also be manifested in Parliament if the Lok Sabha convenes for the monsoon session. Both the DMK with 37 seats in the Lok Sabha and the TMC with 22 are likely to be a vocal presence, buttressed by their state victory.

There is no denying that relations between the Centre and states are likely to get more fraught after this victory, as the BJP has now a significant presence in West Bengal. Bengal Governor Jagdeep Dhankar has been leading a crusade against Banerjee's government in his own way.

In a quiet way, this has also been true of Kerala Governor Arif Mohammad Khan, who has criticised some of the steps taken by the Left Front government in handling the Sabarimala issue.

Parties now in government have had their own litany of grievances against the Centre.

In Tamil Nadu, the delay in establishing centrally funded institutions like AIIMS has been a controversial matter, as have issues of the language of instruction.

In Kerala and West Bengal alike, financial devolution has been repeatedly flagged by the state government, especially shortfall in GST compensation.

All these will get an added edge, leading to frequent stand-offs between the Centre and states in the future.

The disappointing result for the Congress could lead to a fresh impetus for the demand for an internal leadership change.

Even in the Wayanad region in Kerala, represented by Congress MP Rahul Gandhi, the result has not been in favour of the Congress-led United Democratic Front.

Gandhi had launched his own model of candidate selection for the election, with young people from non-political lineage being favoured. This has not had the expected result.

The party's tepid performance in Tamil Nadu has spared some blushes.

But despite extensive political investment in Assam by Chhattisgarh Chief Minister Bhupesh Baghel and party General Secretary Priyanka Gandhi, its performance has been below par.

The Group of 23, which has asked for a more visible leadership of the party, will likely revive its demand for a discussion on this matter.

Leading from all this, some realignments might on the cards. For some time now, Nationalist Congress Party leader Sharad Pawar has been advocating changes in the helmsmanship of the United Progressive Alliance. Now, after the Congress's performance, the voices supporting such a move, including a possible call for all non-Congress, non-BJP forces to realign might gain momentum.

Mamata Banerjee had already written a letter to this effect to Opposition leaders before the assembly elections.

Now that a BJP government has been returned to Assam, moves on the National Register of Citizenship may gain momentum. As can be expected, this will also be strongly resisted in many parts of India, leading to divisions.

In states, pushback from the BJP should be expected. In the Bengal assembly, the party is no longer just a three-member silent spectator: It is now a 70-member assertive presence. It will fall on the TMC and Mamata Banerjee to ensure this divide does not deepen.